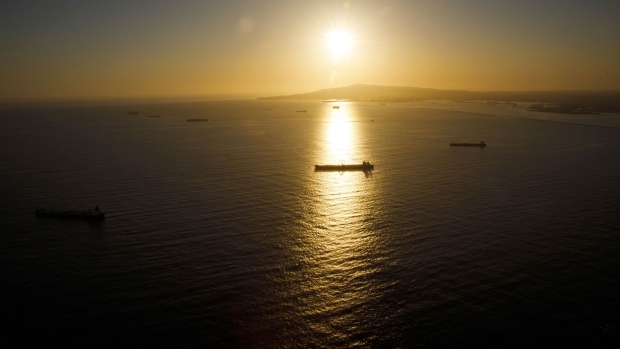 Oil tankers are seen anchored in the Pacific Ocean as the sun sets in this aerial photograph taken above Long Beach, California, U.S., on Friday, May 1, 2020. The volume of oil on vessels located just offshore the state peaked at 26 million barrels over the weekend, about a quarter of the world's daily consumption, before dropping to 22 million barrels on Monday, according to Paris-based Kpler SAS, which tracks tanker traffic. Photographer: Patrick T. Fallon/Bloomberg , Bloomberg

(Bloomberg) -- Unidentified assailants harassed an oil tanker off the coast of Yemen, a Saudi Arabia-led military coalition said late on Wednesday after receiving a distress call from the vessel.

The coalition, which is fighting the Iran-backed Houthi group in Yemen’s war, said the “armed harassment” took place near the Red Sea port city of Hodeida, according to Saudi state television. It didn’t give further details but warned of high risk for vessels in the area.

It’s the latest in a series of incidents this week off Yemen’s coast after a period of relative calm on shipping routes. Yemen’s war and regional tensions with Iran have fueled a spate of attacks on ships in Middle Eastern waters in recent years.

Several rounds of regional diplomacy appeared to ease tensions in recent months. That came alongside efforts by world powers to resurrect a nuclear deal with Iran that could help diffuse concerns over its atomic program and allow it to reenter the oil markets.

The U.K. Navy’s UKMTO said Wednesday a vessel in waters off Yemen had reported a “suspicious approach” but that the ship and crew were safe and had continued on their journey. It wasn’t immediately clear if this was the same ship as the one identified by the coalition.