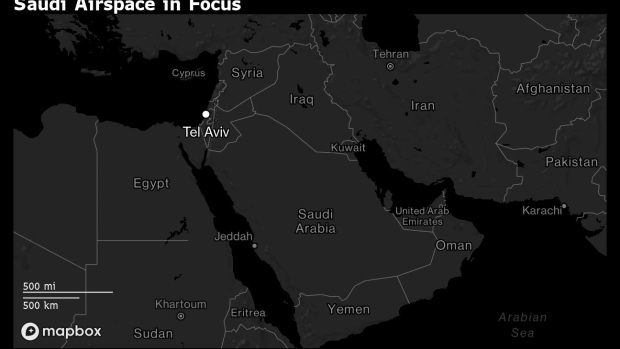 (Bloomberg) -- A deal to open up Saudi airspace to all flights operating into and out of Tel Aviv is being discussed ahead of US President Joe Biden’s trip to the Middle East, according to people familiar with the matter.

Dubai’s Emirates Airline, Bahrain’s Gulf Air and Israeli airlines including flag carrier El Al are currently permitted to use Saudi airspace for Dubai-Tel Aviv and Manama-Tel Aviv routes, but Israel is restricted from using Saudi airspace for any other commercial flights.

With the exception of Air India, other foreign airlines aren’t authorized to cross over Saudi airspace when operating to Tel Aviv, even though they can utilize Saudi airspace for other routes. Airlines have been lobbying for such permission, one of the people said. Israel and Saudi Arabia have no formal diplomatic ties.

Israel’s Foreign Ministry declined to comment for this story but Yair Lapid, the minister, said at a press conference last week that talk of a deal to expand Israeli access to Saudi airspace was “not without some basis.”

The Saudi government’s media office did not respond to a request for comment. There was no comment from El Al or the International Air Transport Association (IATA), which represents airlines. There was no immediate comment from US officials.

The United Arab Emirates, Bahrain and Morocco launched direct flights to Israel for the first time after establishing diplomatic ties with it in late 2020 through the Abraham Accords. Israel has struggled to expand its normalization agreements with other Arab countries since then, however, and there are no official ties with or flights to Gulf powerhouse Saudi Arabia.

Israeli officials including Lapid have hinted in recent weeks that Biden’s upcoming trip to the region could herald some smaller steps toward improving regional relations.

A deal on overflights would likely come as part of a package that could help finalize the transfer of two strategically located Red Sea islands from Egyptian to Saudi control, two of the people said. The islands are part of Israel’s 1979 peace treaty with Egypt and the changes require an agreement on security and freedom of navigation for Israel in the Gulf of Aqaba.

Biden plans to visit the Middle East in July, holding meetings in Israel and the Palestinian territories and capping his trip with a stop in Saudi Arabia, a country he once pledged to turn into a “pariah.”

Saudi Arabia has said Biden’s meeting with the crown prince will discuss issues including economic investment, food and energy security, and expanding trade and commercial ties.

Biden’s trip is being preceded by a regional flurry in diplomacy with Saudi Arabia’s de facto leader Mohammed bin Salman due to visit Egypt, Jordan and Turkey in the coming days.