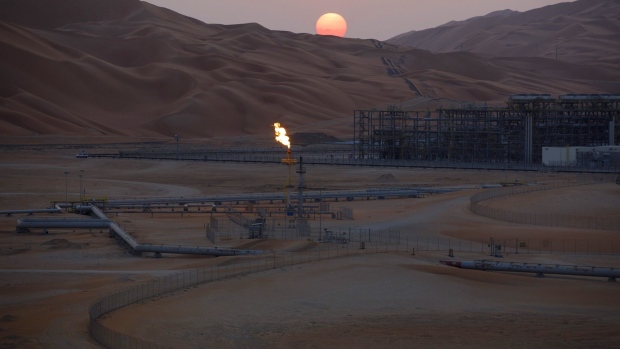 A flame burns from a stack at the oil processing facility at Saudi Aramco's Shaybah oil field in the Rub' Al-Khali desert, also known as the 'Empty Quarter,' in Shaybah, Saudi Arabia, on Tuesday, Oct. 2, 2018. , Simon Dawson

(Bloomberg) -- Saudi Arabia and Kuwait authorized the restart of oil production at the Wafra field from Sunday, more than four years after they halted output at the shared deposit.

The decision was announced in an internal memorandum seen by Bloomberg News. Wafra has been shut since May 2015, due to a dispute over Saudi Arabia’s renewal of Chevron Corp.’s concession there.

Kuwait and Saudi Arabia have said a resumption would be unlikely to add significant amounts of oil to the market within the current duration of the Organization of Petroleum Exporting Countries’ production cuts deal, which runs until the end of March.

The Saudi and Kuwaiti energy ministries could not be immediately reached. A Chevron spokeswoman wasn’t immediately able to comment. Saudi Aramco media declined to comment.

--With assistance from Matthew Martin and Bruce Stanley.

To contact the reporter on this story: Fiona MacDonald in Kuwait at fmacdonald4@bloomberg.net

To contact the editors responsible for this story: Nayla Razzouk at nrazzouk2@bloomberg.net, Riad Hamade