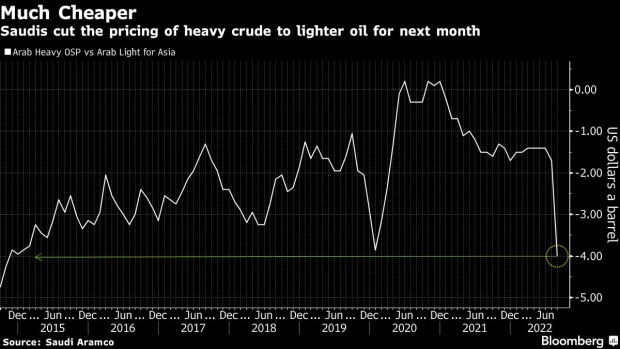 Flames burn off at an oil processing facility in Saudi Aramco's oilfield in the Rub' Al-Khali (Empty Quarter) desert in Shaybah, Saudi Arabia, on Tuesday, Oct. 2, 2018. Saudi Aramco aims to become a global refiner and chemical maker, seeking to profit from parts of the oil industry where demand is growing the fastest while also underpinning the kingdom’s economic diversification. Photographer: Simon Dawson/Bloomberg , Sharon Cho

Saudi Arabia is offering some of its crude at steep discounts to its flagship grade as flows of cheap Russian oil spark intense competition.

The kingdom set the pricing of its Arab Heavy and Arab Medium grades at the largest discount to Arab Light since 2014 for August-loading cargoes to Asia, according to data compiled by Bloomberg. China and India are typically the major buyers of the discounted varieties, but they’ve increased purchases of Russian oil following the invasion of Ukraine earlier this year.

Saudi Arabia is not the only OPEC producer coming under pressure from Asia’s thirst for cheap Russian crude. Iran has been forced to slash the cost of its already discounted oil to compete for customers in China, while Venezuela is offering its crude at a record discount. Iraq has also been affected.

Saudi Arabia also offered similar discounts to customers in Europe and the US, although most buyers of the heavier grades are in Asia because their refineries are typically better equipped to process the sludgy and dense varieties.

Grades such as Arab Heavy and Arab Medium tend to yield more, less profitable fuel oil, which is used in shipping and power stations. That’s made them less attractive, with refiners seeking oil that yields more gasoline and diesel, which are in higher demand.

Profits from turning crude into fuel oil have tumbled in Asia and are near the lowest level since 2019, according to Bloomberg Fair Value data. That’s likely to have contributed to deeper discounts for the heavier grades.