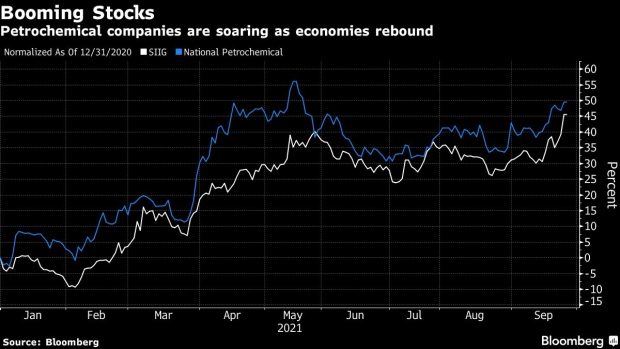 Saudi Industrial Investment Group offered to take over all of National Petrochemical Co. and create one of the largest manufacturers of chemicals in the Middle East, just as prices soar.

The all-share deal will merge two companies with a combined market capitalization of $11.2 billion and comes amid increasing consolidation among Saudi Arabia’s industrial firms as they seek to build scale and improve profitability.

Saudi Industrial Investment Group, known as SIIG, wants to swap 1.27 of its shares of each of National Petrochem’s, according to a statement. The transaction will value National Petrochem at 24 billion riyals ($6.4 billion).

SIIG already owns half of National Petrochem. The companies started negotiations in September 2020 and hired advisers in April.

Prices for chemicals and other petroleum products -- used to make everything from plastics to paint -- have soared this year as major economies recover from the coronavirus pandemic. SIIG and National Petrochem’s stocks are up almost 50% this year.