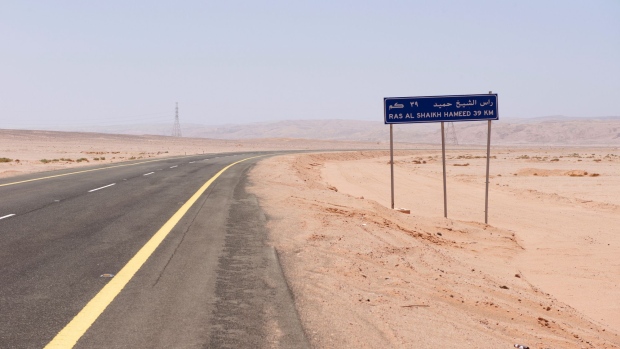 A road sign sits beside a desert highway indicating the distance to the bay at Ras Hameed, Saudi Arabia, on Friday, Feb. 26, 2016. It’s here that Saudi Arabia’s crown prince plans Neom, a city from scratch that will be bigger than Dubai and have more robots than humans. Photographer: Glen Carey/Bloomberg , Bloomberg

(Bloomberg) -- Saudi Arabia’s high-tech “Neom” mega-project plans to expand a tiny local port into a trade and manufacturing hub near the Suez Canal that officials say will compete with the biggest facilities in the Middle East.

The proposal is the latest eye-catching announcement by Neom, with progress on the ground so far limited to earthworks. About 12% of global trade flows through the Suez Canal.

The port will anchor an industrial city that Neom announced last week called Oxagon, Vishal Wanchoo, Oxagon’s chief executive, said in an interview. An existing port near the Red Sea town of Dhiba will be transformed to handle a container capacity of 3.5 to 4 million ton equivalent units (TEUs) by 2030, he said.

The project could eventually serve Neom’s commercial tenants as well as the broader Gulf region, Jordan and Iraq, he said. Capacity might extend up to 9 million TEUs depending on Oxagon’s growth, he added. Dubai’s Jebel Ali port, the region’s largest, has capacity of more than 19 million TEUs.

“We will develop a state-of-the-art port and supply chain system and we have a real advantage because we’re starting as a greenfield,” said Wanchoo, a former GE executive who joined Neom this year.

Announced in 2017, Neom is the crown jewel of Prince Mohammed bin Salman’s program to overhaul the economy of the world’s largest oil exporter. His plan to turn the remote region on the kingdom’s northwest coast into a robot-driven tech hub encapsulates the major elements of his so-called “Vision 2030” to diversify away from crude, loosen social restrictions and boost investment.

But the project has stirred controversy, including skepticism about its feasibility after some previous efforts to build economic free zones struggled to take off.

Oxagon -- which officials say will eventually include a complex that “floats” on the sea -- illustrates those ambitions and challenges.

The 50-square-kilometer (19-square-mile) area is expected to house 80,000 to 90,000 residents and 40 to 50 companies by 2030, Wanchoo said. He did not disclose planned spending on the project, which combines government and private-sector investment.

The first phase of construction, until 2025, will focus on the segment to be built on land, he said, with the floating area still in the “early phases of design.”

“We wanted to look ahead and say with all of the climate change that’s occurring and the rising of the sea levels, could we build a modern day Venice,” he said -- “a floating city that doesn’t have to deal with rising sea levels, or deals with it because of the way it’s designed.”

Neom is looking at connecting Oxagon’s port with northeastern Saudi Arabia and the broader region first by road transport and later by rail, he said. Port operations with container capability will start in mid-2022 and expand from there, he said.

The project would rival the Red Sea city of Jeddah’s port in size. Between Jeddah and Oxagon, the kingdom is also expanding a facility called King Abdullah Port, which aims to reach a capacity of 25 million TEUs.