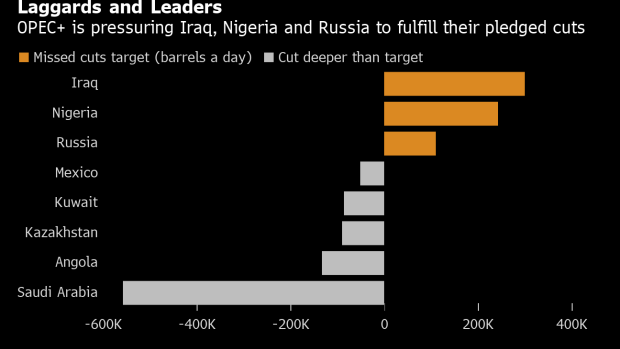 (Bloomberg) -- Since the launch of its strategy to revive global oil markets three years ago, one of the biggest challenges faced by OPEC and its allies is that not all the producers have pulled their weight.

In the subtle diplomacy of Saudi Arabia’s new energy minister, they may at last have found a solution.

Oil prices have slid about 16% from a high in April this year even as the 24-nation coalition has cut production to check the glut threatened by faltering demand and surging U.S. shale oil. A big part of their struggle has been that some producers in the accord, most notably Iraq and Nigeria, have ramped up output rather than reduced it as promised.

A meeting of the group in Abu Dhabi on Thursday signaled they intend to turn the page. Officials from both errant countries addressed its closing press conference with solemn assurances they will meet their commitments in full.

While Iraq and Nigeria have promised in the past to mend their ways, this time seemed different -- and the explanation for that may lie with Prince Abdulaziz bin Salman, appointed less than a week ago as energy minister of Saudi Arabia, OPEC’s biggest member.

It was the prince, whose experience of brokering oil negotiations behind the scenes spans three decades, who gently but firmly persuaded Iraqi and Nigerian officials to finally tow the line, said Mohammad Barkindo, secretary general of the Organization of Petroleum Exporting Countries.

“He was born into power, he understands power -- when to use it and when not to use it,” Barkindo, who has known the prince since the 1980s, said in an interview Thursday.

Key members of the alliance known as OPEC+, which unites OPEC nations and non-members, gathered in Abu Dhabi’s gold-bedecked Emirates Palace hotel this week to review whether their production cuts are working.

Prince Abdulaziz, rather than summoning Iraqi Oil Minister Thamir Ghadhban to his room for a rebuke, asked to visit his counterpart for guidance as he settles into the new role, Barkindo said. The gentle approach “disarmed” Ghadhban and steered the Iraqi to publicly pledge an output cut of 175,000 barrels a day.

“It was quite a remarkable public display of atonement,” said Helima Croft, chief commodities strategist at RBC Capital Markets. She credited the prince’s “deft and subtle performance” for the achievement.

Making the OPEC+ deal a success is crucial for the kingdom, which the International Monetary Fund estimates requires an oil price of $85 a barrel to balance its budget, compared with current market levels of about $60. Plans to sell part of state-run oil giant Saudi Aramco only add to the pressure it faces to bolster crude markets.

The real proof of whether Riyadh has succeeded will only arrive in coming weeks, when estimates from consultants and media agencies will show if Iraq and Nigeria have met pledged cuts. Both countries have vowed to meet their commitments in the past, only to press on with output increases.

Baghdad was reluctant to join in the OPEC+ accord from its very inception three years ago, arguing that after decades of wars and sanctions it should be exempt from making cutbacks, and instead allowed to let international companies press on with expansion projects.

Crude traders indicated they were initially skeptical, with Brent futures falling as much as 3.1% to $58.92 a barrel on the ICE Futures Europe exchange in London on Thursday.

The prince’s labors this week are just the latest example of a career devoted to petroleum diplomacy.

He played a pivotal role in secretive talks in Paris that paved the way to the production cuts announced by OPEC in late 2016 -- the group’s first market intervention in eight years.

Although the negotiations were led by Khalid Al-Falih, Saudi energy minister at the time, Al-Falih would regularly defer to the prince because of his longer experience in OPEC matters and personal relationships with member countries, Barkindo said.

In June last year, when the Saudis’ decision to increase production prompted their rivals, Iran, to storm out of a meeting, it fell to the prince to help reach a compromise with Iranian Oil Minister Bijan Namdar Zanganeh. Further back, OPEC agreements in Riyadh and Caracas were “midwifed” by Abdulaziz, according to Barkindo.

A bigger test of the prince’s leadership skills will come in December, when OPEC and its partners will need to decide whether to cut production even more deeply to prevent a new surplus in 2020.

The Saudi minister may also need to work hard to ensure the continued co-operation of Russia, the biggest non-OPEC producer in the accord. The strength of the Saudi partnership with Russia often seemed to hinge on the personal rapport struck between Al-Falih and his counterpart, Alexander Novak.

Whenever discussions became difficult over the years, the prince’s urbane composure would offer only one clue, Barkindo said.

“He never lost his temper,” said the secretary-general. But “when you saw him ask for his cigarettes, that means he’s been pushed.”

To contact the reporters on this story: Grant Smith in London at gsmith52@bloomberg.net;Nayla Razzouk in Dubai at nrazzouk2@bloomberg.net