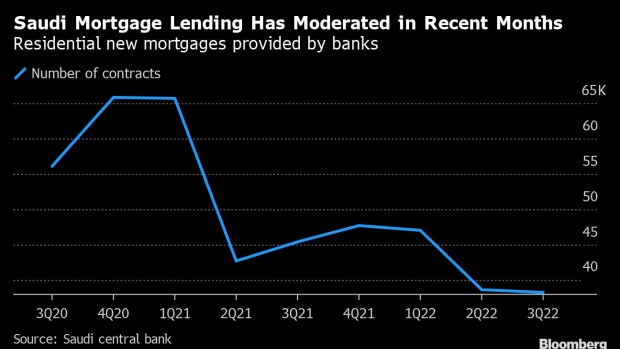 (Bloomberg) -- Saudi Arabian banks are looking to offload more mortgages to a government-backed finance company and ease liquidity pressures that have pushed lending costs to a record high, according to a Saudi banking official.

The Saudi Real Estate Refinance Co., the state-run equivalent of Fannie Mae and Freddie Mac in the US, is seeing increased interest from commercial banks about securitizing their fast-growing home loan portfolios, Chief Executive Officer Fabrice Susini said in an interview last week.

“The environment for the banks has changed and liquidity is more scarce,” Susini said. Demand for mortgages is “still there,” he added, and “banks are more incentivized to find the refinancing solution that will allow them to keep originating mortgages whilst limiting the footprint on their balance sheet.”

The current funding stress on Saudi banks has little precedent outside of oil price crashes or global crises. The three-month Saudi Interbank Offered Rate, or Saibor, hit a record 5.9% at the end of October, even higher than during the financial crisis in 2008. Mortgage lending in October fell year-on-year, according to central bank data, as rising rates kept some borrowers away.

Saudi’s mortgage market has ballooned under the state’s plan to boost homeownership rates to 70% by 2030 from 47% in 2016. Banks have about 660 billion riyals ($175.5 billion) of real estate loans, a total that’s roughly trebled over five years, central bank data show.

Previously, banks “had a very strong incentive to keep those assets. They are very attractive, risk-adjusted, and cost-wise those were probably the best assets they could hold,” according to Susini. The incentives are shifting in favor of liquidity as the loan books get even bigger, he added.

SRC, as the mortgage refinance firm is known, has grown its balance sheet from 1.5 billion riyals in 2017 to more than 13 billion riyals last year. Susini expects to see assets reach 20 to 24 billion riyals by the end of the year.

“Despite mortgages remaining attractive after pricing adjustments, with yields now at 6% to 6.5%, Saudi banks’ cost of capital is rising. Saudi banks are better off accessing the underutilized capital markets, making up 1% of their funding compared with above 11% for UAE peers, and securitizing their mortgages.”

The organization has been tapping the domestic sukuk market to fund deals with the banks, issuing almost 18 billion riyals in Islamic bonds in the past 18 months, he said.

SRC will also start issuing residential mortgage-backed securities within the kingdom from the third quarter of next year and will sell similar securities internationally in 2024, the CEO said.

“When you look at the balance sheet of the banks, their assets over the past 12 months have grown much quicker than their deposit. So much so, that the banks in May and June reached the 100% loan-to-deposit ratio that they haven’t reached for years,” he said. “This is impacting the willingness of the banks to get funding alternatives developed.”

--With assistance from Matthew Martin and Abeer Abu Omar.