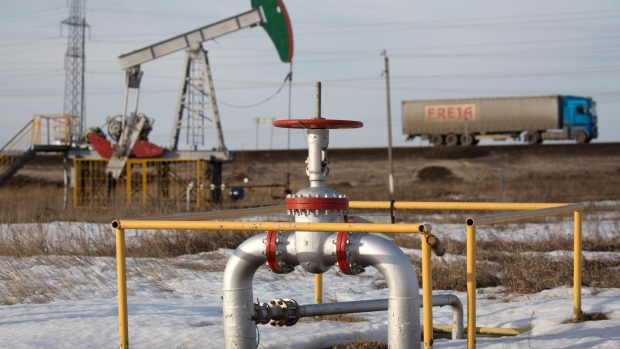 An oil pumping jack, also known as "nodding donkey", operated by Tatneft PJSC, stands in an oilfield near Almetyevsk, Tatarstan, Russia, on Wednesday, March 11, 2020. Saudi Aramco plans to boost its oil-output capacity for the first time in a decade as the world’s biggest exporter raises the stakes in a price and supply war with Russia and U.S. shale producers. Photographer: Andrey Rudakov/Bloomberg , Bloomberg

(Bloomberg) -- Saudi Aramco said oil-output capacity across the world is dropping quickly as the kingdom opened the fifth edition of its flagship investment conference Tuesday in Riyadh.

Aramco’s Chief Executive Officer Amin Nasser made the remarks in an interview on the sidelines of the conference, which marks a return to business for the world’s largest oil exporter after the pandemic disrupted last year’s event.

With about 2,000 delegates and 100 speakers taking part, this year’s Future Investment Initiative is about half the size of previous years but will largely be taking place in person, in contrast to a redacted version that was held in January, when most speakers dialed in virtually.

Fink said we are going to have to ‘reimagine’ the role that the World Bank and the International Monetary Fund plays in helping poorer countries tackle climate change.

“We have to reimagine the World Bank and the IMF,” he said. “We are going to have to focus on how to bring this money forward if we are going to bring the capital to get the emerging world forward on climate risk.”

Blackstone’s Schwarzman: Women Were Scared of Us So We Went to Them (10:20 a.m.)

Schwarzman said Blackstone was having trouble hiring women into its male-dominated ranks because they were intimidated by the financial industry. The firm decided in 2015 to change that and now has 50% women in its entering classes, up from 10%.

“We analyzed it and what we realized is that women weren’t applying to Blackstone. We tried to find out why and we found out that they were scared of us. I don’t think I’m very scary,” Schwarzman said.

“So what we did was we went to some of the great universities as sophomores and we met a lot of women and said jeez why don’t you do like an internship down at the firm.”