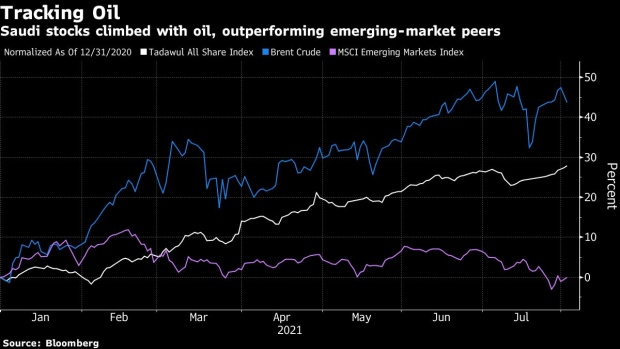 The benchmark Tadawul All Share Index climbed 0.8% on Monday, closing at the highest level since January 2008. The gauge rose for an 11th session, the longest winning streak in about a year.

There are “structural factors such as a growing mortgage market, shift into organized sectors, more listed companies with different economics and better liquidity all translating to better returns for the Saudi stock market,” according to Mazen Al-Sudairi, head of research at Al Rajhi Capital. Also, Saudi Arabia’s full-year inflation is expected to be higher than bond yields, making stocks a more attractive inflation hedge, he said.

Higher oil prices and government projects, including a program which aims to release 5 trillion riyals ($1.3 trillion) of private sector investment, have also supported shares listed in the kingdom this year.

The benchmark has outperformed emerging-market peers through 2021, but is still about 46% below its record high in 2006, when efforts by the government to use capital markets to help redistribute oil wealth went some way to fueling a speculative bubble driven mostly by retail traders.

A steep crash followed, sparked by several factors including rumors of a crackdown on insider trading and trading limits introduced by the regulator that sparked a wave of panic selling.