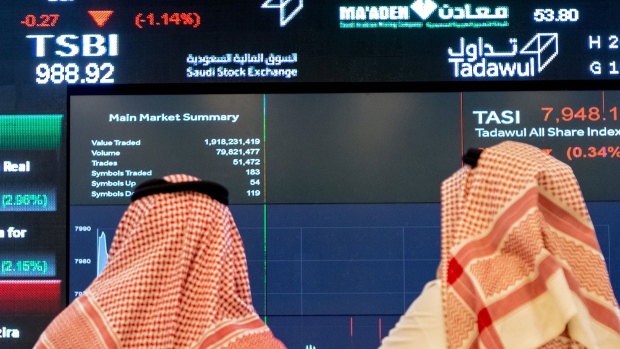 Visitors look at stock price information displayed on a digital screen inside the Saudi Stock Exchange, also known as the Tadawul, in Riyadh, Saudi Arabia, on Tuesday, April 10, 2018. Foreign investors bought more Saudi stocks in March than ever before in anticipation of the kingdoms upgrade to emerging-market status. Photographer: Bloomberg/Bloomberg , Photographer: Bloomberg/Bloomberg

Stocks in the Middle East picked up on Friday’s rally across global markets as oil’s gains through $85 a barrel emboldened investors.

“GCC markets are taking cues from the positive performance in global equity markets on Friday,” said Junaid Ansari, head of investment strategy and research at Kamco Invest. “Moreover, oil is now trading at close to eight-year high levels. This should provide a boost on the economic front for almost all the GCC economies.”