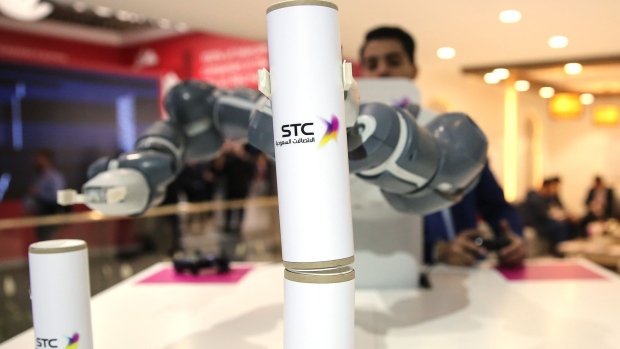 An attendee controls a 5G robotic arm on the Saudi Telecom Co. stand during the opening day of the Mobile World Congress (MWC) in Barcelona, Spain, on Monday, Feb. 26, 2018. At the wireless industry's biggest conference, more than 100,000 people are set to see the latest smartphones, artificial intelligence devices and autonomous drones exhibited by roughly 2,300 companies. Photographer: Angel Garcia/Bloomberg , Bloomberg

(Bloomberg) -- Saudi Arabia’s sovereign wealth fund is set to raise as much as $3.1 billion through the sale of shares in Saudi Telecom Co. as it looks to fund a huge investment program to diversify the oil-dependent economy.

The Public Investment Fund will sell a 5% stake in STC, as the Middle East’s most profitable mobile-phone operator is known, through a secondary offering starting from Dec. 6, according to a statement to the stock exchange. A total of 100 million shares will be offered at between 100 riyals ($26.70) to 116 riyals.

Saudi Arabia’s sovereign wealth fund is one of the main vehicles for Crown Prince Mohammed Bin Salman’s plans to diversify Saudi the economy away from oil. It’s previously said it would invest about $40 billion in the domestic economy a year until 2025.

The fund has borrowed money, sold off assets and received cash infusions from the government as it looks for ways to pay for its new investments. The PIF also says it uses money generated from existing investments to fund new deals.

The fund said in September that it had hired a group of banks including Goldman Sachs Group Inc., HSBC Holdings Plc and Morgan Stanley to manage the sale of part of its 70% stake in STC.