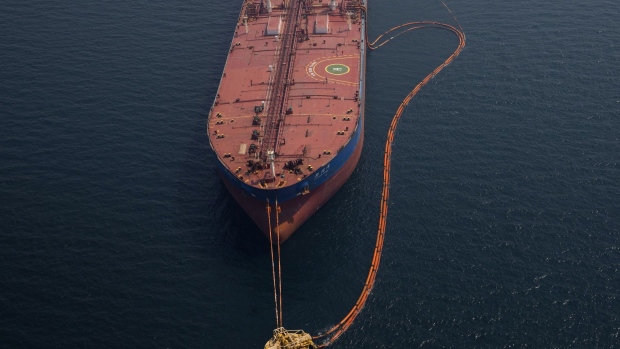 (Bloomberg) -- While Saudi Arabia and its allies may be considering all possible means to end the slump in oil prices, the options available to them are scarce.

The world’s biggest crude exporters have already been laboring since the beginning of the year to shore up prices by cutting production. That Brent futures nonetheless sank on Wednesday to a seven-month low demonstrates the limits of their powers.

Unlike previous market routs, the immediate problem doesn’t seem to be one of excess supplies. Instead, a cooling global economy and a prolonged trade dispute between the U.S. and China are putting a brake on fuel demand. Even if the Saudis and others in the OPEC+ cartel decide to cut output further, they may struggle to revive prices.

“There’s not much you can do to fix the trade war or emerging currency war if you are an oil producer,” said Bill Farren-Price, a director at consultants RS Energy Group Inc.

It’s been just over a month since the Organization of Petroleum Exporting Countries and its partners agreed to persevere with supply curbs into early 2020. The group’s efforts in the first half of this year were effectively doubled as sanctions and political crises crushed output from member nations Iran and Venezuela.

Nevertheless, the past week has seen a plunge of about 12% in Brent futures, which at $57 a barrel are far below the levels most OPEC nations need to cover government spending.

“The sharp move we’ve seen in the last couple of days has probably made it more acute that this is not working,” said Edward Bell, director of commodity research at Dubai-based bank Emirates NBD PJSC.

Prices recovered some of their losses on Thursday after a Saudi official, speaking anonymously, said the kingdom won’t tolerate a further sell-off and has phoned other producers to discuss a response. The only available course would appear to be deepening the current cutbacks.

The OPEC+ alliance, which spans the 14 OPEC nations and 10 non-members such as Russia, pledged at the start of this year to reduce daily output by 1.2 million barrels a day. Key nations will gather in Abu Dhabi on Sept. 12 to review the strategy.

“There aren’t many tools in the tool-box other than faster and deeper cuts,” said Bob McNally, president of Rapidan Energy Group and a former oil official at the White House under President George W. Bush.

However, reaching a new agreement may be beyond their grasp.

Some OPEC countries, notably Iraq and Nigeria, haven’t even made the supply reductions they pledged to implement at the start of the year.

Saudi Arabia, having cut more than twice as much oil output as promised, has signaled it’s unwilling to continue shouldering the burden alone. Saudi Energy Minister Khalid Al-Falih insisted at OPEC’s last meeting in July that the kingdom had already cut “deep enough.”

The kingdom will keep a lid on supplies next month, providing customers with 700,000 barrels a day less than they requested, according to Saudi officials who asked not to be identified. While that means production in September will be lower than August, agreeing to cut deeper on a sustained basis is another question.

It’s also unclear whether Russia, the biggest and most critical of the non-OPEC partners, would be willing to trim supply further. Companies like Rosneft PJSC are eager to start new projects, while President Vladimir Putin has indicated he’s satisfied with prices near current levels.

Even if the producers did agree on deeper curbs, the fears about demand may be too entrenched for them to succeed.

Global oil-consumption growth was the weakest since 2011 in the first quarter, at just 310,000 barrels a day, amid a manufacturing lull in China and elsewhere, according to the Paris-based International Energy Agency.

Saudi Arabia saw a recovery in customers’ demand for supplies in September, to the highest since late 2018, as consumption strengthened across all regions, according to the Saudi officials. The kingdom could have reversed all of this year’s cutbacks to satisfy their requests, but chose not to, they said.

But as Washington and Beijing hit one another with increasingly punishing trade tariffs, putting a dampener on economic growth in the world’s two biggest oil consumers, the market’s hopes for a recovery are dimming. With the risk of global recession rising, the demand outlook may instead deteriorate.

“How excited can you be about oil if you believe we can wake up tomorrow and go right back to a trade war?” said Helima Croft, chief commodities strategist at RBC Capital Markets. “You have to ask whether Trump’s volatility is going to put a permanent cap on oil prices?”

OPEC’s room for maneuver may also be constrained by the U.S. oil industry.

The boom in American shale oil this decade has been the ultimate source of the glut that the cartel has been trying to combat for the past few years. Saudi Minister Al-Falih reiterated in July that the kingdom won’t pursue “endless” production cuts that perpetuate the surplus by encouraging more investment in shale.

The U.S. surge has tapered off in recent months as shale drillers confront the geological challenges arising from rapid expansion, as well as pressure from shareholders seeking a better return on their investments. That slowdown may help OPEC’s campaign to keep markets in balance, but could reverse if the cartel begins new action to bolster prices.

“Does the kingdom really want to get into a cycle of deeper cuts to make room for rival suppliers, the way it did in the 1980s?” said Derek Brower, a director at RS Energy Group.

Given the pitfalls posed by taking new measures, Saudi Arabia may simply be hoping that showing a readiness to act in itself is enough to reassure investors without the need for intervention, said Harry Tchilinguirian, head of commodity-markets strategy at BNP Paribas SA in London.

(Updates with Saudi oil exports in 14th and 18th paragraphs.)

--With assistance from Verity Ratcliffe, Alex Nussbaum and Nayla Razzouk.

To contact the editors responsible for this story: James Herron at jherron9@bloomberg.net, Rakteem Katakey, John Deane