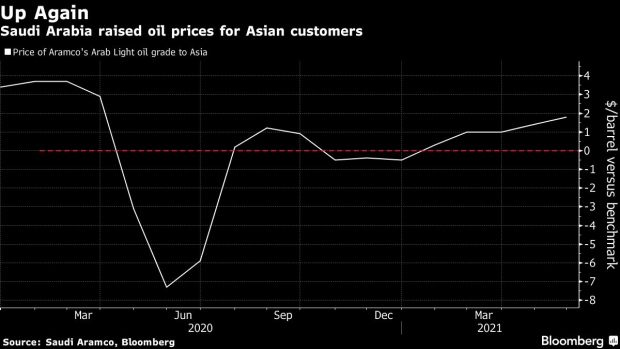 A motorcyclist exits an Indian Oil Corp. gas station in Bengaluru, India, on Thursday, March 4, 2021. India’s record pump prices of gasoline and diesel are the newest threat to the economy's nascent recovery, as high local taxes on retail fuel risk fanning inflation and driving a wedge between the objectives of fiscal and monetary policy makers. Photographer: Dhiraj Singh/Bloomberg , Bloomberg

Saudi Arabia raised prices for oil shipments to customers in its main market of Asia for next month, signaling the kingdom’s confidence in the region’s economic recovery.

The decision comes after the OPEC+ cartel, led by the Saudis and Russia, agreed to boost daily crude production by more than 2 million barrels between May and July.

Aramco, the Saudi state energy firm, will increase prices of its grades for Asia by between 20 and 50 cents a barrel, according to a person familiar with the matter. It will raise the key Arab Light grade for the region by 40 cents from April to $1.80 per barrel above the benchmark. The company had been expected to hike the grade by 30 cents, according to a Bloomberg survey of eight traders and refiners.

Most prices for North West European customers won’t be changed, though Arab Light for the region will drop by 20 cents to $2.40 below the benchmark. Most grades to the U.S. will be cut by 10 cents.

Prices for Asia have been above those for Europe and the U.S. for several months, partly due to energy demand in the latter two recovering more slowly from the coronavirus pandemic.

Saudi Energy Minister Prince Abdulaziz bin Salman told counterparts at the meeting that OPEC+ still needed to be cautious until the global economic recovery is complete. The group started unprecedented production curbs last May to bolster oil prices and is still holding back several million barrels a day from the market.