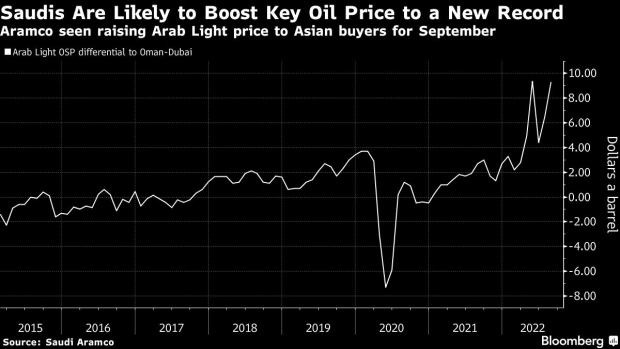 OPEC+ kingpin Saudi Arabia is expected to price its flagship crude to Asia at a record differential for September even as traders see the scope for a weaker spot market the following month, highlighting a potential turning point for the market.

The world’s top crude exporter is expected to price its Arab Light crude to Asia at a $10.80-a-barrel premium to the region’s benchmark for September-loading cargoes, according to the median estimate in a Bloomberg survey of five refiners. At the same time, a slump in margins for Asian processors means that such a hike may dampen any requests for extra barrels, traders said.

Global crude prices are headed in July for their first back-to-back monthly loss since late 2020 as investors attempt to price in the risks of a US recession, tighter monetary policy, and China’s repeated efforts to tame Covid-19. Despite the drop, the oil market’s physical signals remain robust for now, with Saudi Aramco set to release its official selling prices for September next week.

Some Asian processors have started to mull a reduction in operating capacity from September after running at maximum rates in recent months following the Ukraine war, which upended trade flows and helped boost gasoline prices to a record. Any pullback would carry the potential to soften crude oil demand in the coming months.

The bullish momentum for Middle Eastern crude is likely to reach a turning point next month for October-loading cargoes, traders who buy and sell those barrels said, citing the marked decline in refining margins. Gasoline cracking margins in Asia have slumped more than 70% since late June, while those for diesel sank 39%.

The spot premium for Abu Dhabi’s Murban crude for October is seen declining at least $1 a barrel compared with shipments loading in September, according to traders. Physical cargoes of September-loading Murban crude, favored by buyers in Japan, South Korea and Thailand, traded at more than $10 a barrel premium to Dubai benchmark in the spot market earlier this month.

Saudi Arabia is the de facto leader of the Organization of Petroleum exporting Countries, which seeks to steer the global oil market by regulating production with allies including Russia. OPEC+, as the wider group is known, meets to assess supply policy next week.