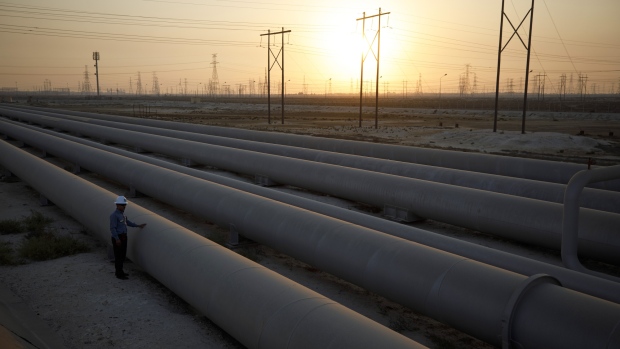 Saudi Arabia restarted its main cross-country oil pipeline after a drone attack by Iran-backed rebels that halted the link and escalated tensions in the world’s largest oil-exporting region.

Saudi Aramco resumed operations at the pipeline after a halt Tuesday, the state-run oil company said in an emailed statement. A drone attack claimed by Houthi rebels in neighboring Yemen on Tuesday had targeted two pumping stations along the link, which crisscrosses the Arabian peninsula, carrying crude, natural gas and refined products.

The risks of conflict in a region that exports more than 16 million barrels of oil a day -- enough to supply all of Europe’s demand and more -- have risen since the U.S. revoked waivers this month that allowed Iran to continue selling oil to some customers despite American sanctions. Saudi Arabia and the United Arab Emirates -- Iran’s regional foes -- reported on Monday attacks on several vessels including Saudi oil tankers. Houthi rebels on Tuesday claimed they had used drones to damage Saudi oil-pumping stations.

The targeted pipeline carries crude 1,200 kilometers (746 miles) between the Persian Gulf and Red Sea, enabling the Saudis to ship oil from both sides of the country. Saudi Aramco, the world’s biggest oil exporter, said Tuesday that supplies of crude and refined products continued without interruption despite the attack. Iran denounced Sunday’s maritime incident near Hormuz and warned against attempts to destabilize the region.

It’s not the first time oil infrastructure has been targeted in Saudi Arabia, a country that pumps 10 million barrels a day, or about 10 per cent of global production. In 2005, security forces foiled a suicide attack on the Abqaiq oil-processing center, which handles about two-thirds of the country’s production.

An uninterrupted supply of Saudi oil is crucial right now because the nation is almost alone in having enough spare production capacity to compensate for the slump in Iranian exports. After the U.S. earlier this month ended sanctions waivers for a handful of buyers of Iranian oil, Tehran responded by threatening to block shipments through Hormuz, through which about 17.5 million barrels of oil passes every day.