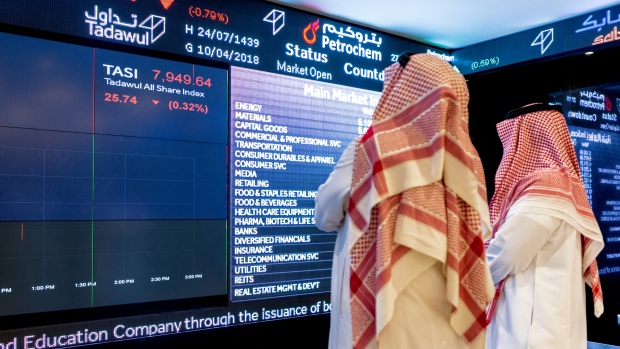 Visitors look at stock price information displayed on a digital screen inside the Saudi Stock Exchange, also known as the Tadawul, in Riyadh, Saudi Arabia, on Tuesday, April 10, 2018. Foreign investors bought more Saudi stocks in March than ever before in anticipation of the kingdom’s upgrade to emerging-market status. , Bloomberg/Abdulrahman Abdullah

Saudi Arabia is delaying the initial public offering of its stock exchange on hopes that a potential MSCI Inc. (MSCI.N) upgrade could boost its value, according to people with knowledge of the matter.

The Tadawul, as the Middle East’s biggest stock exchange is known, has pushed back plans to sell shares to 2019 at the earliest, from this year, said the people, asking not to be identified because the information is private. Waiting until after a possible classification as an emerging market in June could improve trading volumes and help the bourse achieve a better valuation for its owner, the Public Investment Fund, they said.

The exchange’s main stock gauge, the Tadawul All Share Index, is among the world’s top 10 best performers this year after FTSE Russell classified the country as a secondary emerging market in March. That helped boost the gauge’s 12-month price-to-earnings ratio to the highest since 2015, the most expensive compared to emerging-market stocks in almost three years.

The Tadawul “recognizes the importance of confidence-building and fair valuation in reflecting its capacity, infrastructure and liquidity,” a spokesman said in an emailed statement. As the bourse moves forward with IPO planning and consultations with key stakeholders, the Tadawul will determine the best timing for a sale, he said. HSBC and the PIF declined to comment.

It “makes sense for them to wait,” said Joice Mathew, the head of equity research at United Securities in Muscat. “With MSCI inclusion coming, entering emerging markets will bring a lot of attention from international institutional investors.”

The Saudi stock exchange hired HSBC Holdings Plc’s (HSBC.N) local unit in 2016 to advise on the IPO. The potential offering is part of the kingdom’s privatization drive to wean its economy off oil. It also includes plans to sell shares in oil giant Saudi Aramco, local soccer clubs and grain silos.

The bourse could attract US$41 billion of foreign capital if MSCI Inc. follows FTSE with an upgrade this year, according to Al Rajhi Capital. FTSE will implement the classification from next year, and MSCI is expected to do the same. Foreign investors have been net buyers of shares in Riyadh for sixteen straight weeks this year, but still only own hold about five per cent of total shares.

The Tadawul index has advanced 15 per cent this year, compared with a drop of 0.2 per cent for the MSCI Emerging Market Index. While the 50-day moving average for the total value of Saudi shares traded is the highest in more than a year, it’s about 30 per cent lower than it was two years ago.