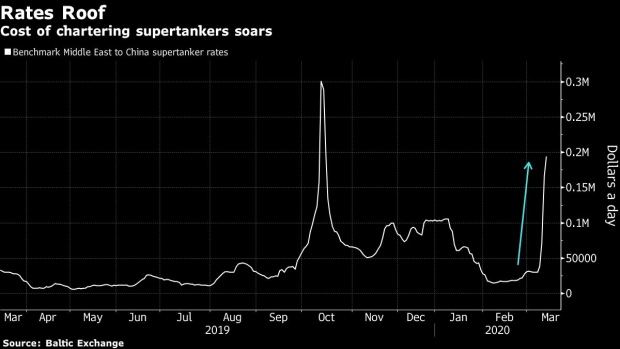 EGYPT - DECEMBER 06: The Gemini Star oil tanker, owned by Vela International Marine, a subsidiary of Saudi Aramco, offloads into a single buoy mooring at the start of the Sumed pipeline in the Gulf of Suez, near the port of Ain Sukhna, Egypt, on Thursday, Dec. 6, 2007. Arab Petroleum Pipelines Co., a joint venture between state-owned companies from Egypt, Saudi Arabia, Kuwait, the United Arab Emirates and Qatar, runs the crude-oil pipeline, which bypasses the 101-mile Suez Canal between the Red and Mediterranean seas, reducing congestion on the waterway. (Photo by Dana Smillie/Bloomberg via Getty Images) Photographer: Bloomberg/Bloomberg , Bloomberg via Getty Images

(Bloomberg) -- Saudi Arabia is snapping up more and more oil tankers as the kingdom prepares to flood the world with crude.

The world’s largest exporter, which began hiring extra ships almost as soon as a pact with Russia to limit oil supplies fell apart, has now provisionally hired 25-30 giant oil carriers to load late this month or early next, according to six shipbrokers and executives involved in the market. It’s rare for Saudi Arabia’s state tanker company to book other companies’ ships as it’s doing now. The cargoes in question would be enough to supply France for about a month.

The Saudis’ forays into the tanker market come at a time when the country has told customers it will massively ramp up deliveries to regions including Europe at heavily discounted prices. The bookings have caused a ship shortage as well as a surge in tanker earnings and the shares of owners like Frontline Ltd. and Euronav NV. Crude is trading deep in a so-called contango price structure, where spot barrels are so cheap that traders try to store them at sea for sale at higher prices later.

“It’s a great time to be a tanker owner,” said Burak Cetinok, head of research at Arrow Shipping Group Ltd., a ship broker in London. “The near term prospects for the tanker market are exceptionally positive.”

The tankers booked by Bahri, Saudi Arabia’s tanker company, have so far mostly been for loading in late March or early April, one of the people said. It’s commonplace for at least some charters to fall through for a mix of commercial and operational reasons. Of the 25-30, the vast majority are Very Large Crude Carriers, or VLCCs, each designed to transport 2 million barrel cargoes, the people said.

A deal that Saudi Arabia had been proposing to restrict oil supply fell apart on March 6 when Russia declined to back the plan. A day later, Saudi Arabia announced huge crude-price discounts for refiners, and by Wednesday it was clear the kingdom would ship far more than normal.

Earnings from benchmark tanker rates jumped 700% the past week to $243,000 a day, according to data from the Baltic Exchange in London.

Over the last week, Saudi Arabia, Russia, Iraq, Nigeria and the United Arab Emirates have all indicated plans to lift supply in the coming months. That’s pushed charter rates to their highest level in 5 months, with tanker owners hoping to profit as long as the price war goes on.

“Fundamentally, the current spike in rates is driven by a surge in Saudi oil production and hence can be seen as an oil supply push,” Clarksons Platou analysts including Frode Moerkedal said in a note.

Traders are inquiring about crude tankers to store oil, following the return of a so-called super-contango structure. In such markets, companies can buy oil cheaply, store it on ships for a period of time, and then sell it at a higher price later, potentially making millions.

Frontline said earlier in the week that both oil traders and majors had been inquiring about such floating storage options. Vitol and Shell were among the companies looking to book ships with options for storage this week, according to fixture reports seen by Bloomberg. Product tanker company Torm A/S said it has recently received several floating storage requests across various fuel markets. The surge in freight rates has diminished the appeal of storing.

Like floating storage, some vessels may also sail slower in order to reach their destination later, when a cargo is likely to be more valuable, Robert Hvide Macleod, the chief executive officer of Frontline’s management company said. Though oil tankers are generally contracted to sail at 13 knots, one newbuild supertanker was seen sailing from Asia to Europe at about 2 knots slower than that speed with a cargo on board.

Despite resurgent optimism among shipowners, there are still reasons to be cautious. Last time rates reached these levels, requests to book ships were subsequently cancelled, with the market then dropping. On Friday, China’s top oil trader was said to be trying to get out of loading some cargoes from the Middle East after the most recent spike in freight.

Still, with Saudi Arabia continuing to underpin the market, some owners are starting to believe that this time may be different.

“Not only is Bahri going on a chartering spree, but also the traders and other majors are also joining the party,” said Randy Giveans, a shipping analyst at Jefferies. “We expect rates to remain near these record high levels for at least the next few weeks.”

To contact the editors responsible for this story: Alaric Nightingale at anightingal1@bloomberg.net, John Deane