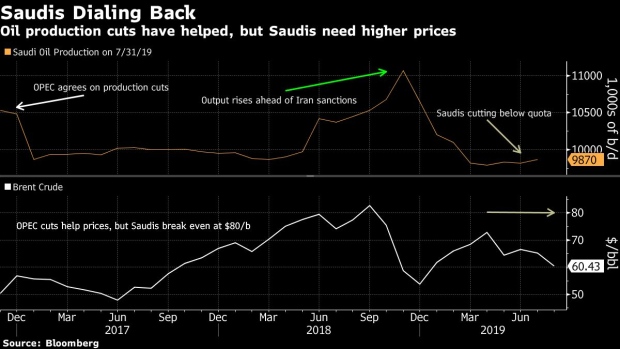 An employee stands near pipes used for landing and unloading crude and refined oil at the North Pier Terminal, operated by Saudi Aramco, in Ras Tanura, Saudi Arabia, , Anthony DiPaola

(Bloomberg) -- With oil trading below Saudi Arabia’s break-even level, energy policy is a a top priority for the world’s biggest crude exporter. Following the loss of most of his domestic portfolio, Energy Minister Khalid Al-Falih will now have more time to work on balancing the market.

Saudi Arabia will split the vast energy, industry and mining portfolio that Al-Falih had run since 2016 into two separate ministries. The reshuffle, announced as part of a raft of royal decrees on Friday, sees Al-Falih keeping responsibility over energy policy and losing the industry and mining aspects of the role.

Al-Falih has been the face of OPEC diplomacy over the past three years as the producer group has sought to counter the rising tide of U.S. shale oil that flooded markets. The ministry reshuffle won’t change Saudi oil policy as the kingdom remains focused on curtailing production to balance crude markets and prop up prices, said Edward Bell, commodities analyst at lender Emirates NBD PJSC in Dubai.

“This is crunch time now for the next couple of months” as crude suppliers struggle to deal with the U.S.-China trade war and the potential adverse impact on the global economy, Bell said. “They can control the supply part of the picture, but weak demand and the perception of that is what’s dictating the price.”

Saudi Arabia has cut production to less than 10 million barrels a day as part of its agreement with the Organization of Petroleum Exporting Countries to limit output. Al-Falih helped broker the deal that brought other producers like Russia into the effort to balance markets by curbing production. The Saudis are doing most of the heavy lifting to support the deal, pumping about 500,000 barrels a day less than they pledged.

The cut in production comes as Saudi Arabia is embarking on a plan to plow investment into new industries like manufacturing and mining to help reduce the government’s reliance on oil revenue. The country needs crude to trade near $80 a barrel to balance its budget, according to research from the International Monetary Fund and Bloomberg Intelligence. Brent crude closed Friday at about $60 a barrel.

What’s more, it has to attract hundreds of billions of dollars in foreign investment through partnerships to expand those businesses. Al-Falih had been the face of Saudi efforts to bring in foreign partners by spearheading industrial investment initiatives meant to bring almost half a trillion dollars into the economy.

Spinning off the industry and mining portfolios brings the energy ministry back to the core functions it was responsible for under Al-Falih’s long-serving predecessor Ali Al-Naimi. It was only when Al-Falih replaced Naimi in 2016 that the role expanded to cover large swathes of the domestic economy.

A cornerstone of the Saudi economic program is the planned sale of shares in state producer Saudi Arabian Oil Co., known as Saudi Aramco. With the initial public offering set to go ahead as early as 2020, Al-Falih will work on managing and promoting the sale. It’s still unclear what Aramco’s valuation will be and where the shares will list.

To contact the reporter on this story: Anthony DiPaola in Dubai at adipaola@bloomberg.net

To contact the editors responsible for this story: Nayla Razzouk at nrazzouk2@bloomberg.net, Rachel Graham, James Amott