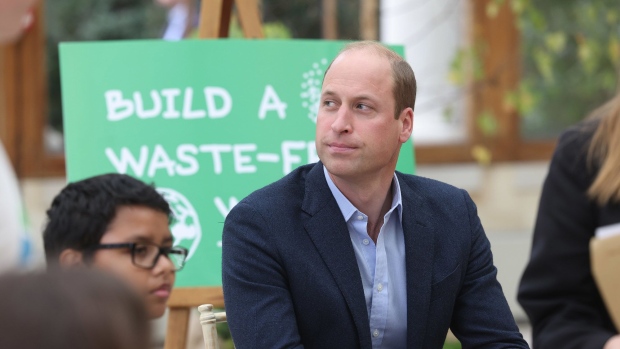 LONDON, ENGLAND - OCTOBER 13: Prince William, Duke of Cambridge and Catherine, Duchess of Cambridge (not pictured) visit Kew Gardens to take part in a Generation Earthshot event with children from The Heathlands School, Hounslow to generate big, bold ideas to repair the planet and to help spark a lasting enthusiasm for the natural world on October 13, 2021 in London, England. At the Royal Botanic Gardens, Their Royal Highnesses will join the Mayor of London; explorer, naturalist and presenter Steve Backshall MBE; Olympian Helen Glover and students to take part in a series of fun, engaging and thought-provoking activities developed as part of Generation Earthshot, an educational initiative inspired by The Earthshot Prize. (Photo by Ian Vogler-WPA Pool/Getty Images) , Photographer: WPA Pool/Getty Images Europe

(Bloomberg) -- Prince William has criticized some of the world’s richest billionaires like Elon Musk, Jeff Bezos and Richard Branson for their perceived focus on space rather than the climate.

“We need some of the world’s greatest brains and minds fixed on trying to repair this planet, not trying to find the next place to go and live,” the Duke of Cambridge said in an interview with the BBC.

William, who is second in line for the U.K. throne after his father Prince Charles, made the comments ahead of an award ceremony on Sunday for the Earthshot Prize, which the prince started last year. The award will give five prizes of 1 million pounds ($1.37 million) each year for leading solutions to the world’s environmental problems.

The future king, and father to three children, also warned of a rise in “climate anxiety” among young people. A global study found that almost half of young people surveyed said anxiety and distress over the climate crisis was affecting their daily life.