There's so much pent-up demand, the issue is labour: Airlines expert

Scandinavian airline SAS AB filed for Chapter 11 to tackle its debt burden as the recovery from the disruption caused by the coronavirus pandemic has been slower than expected.

The Stockholm-based company is in “well advanced” discussions with a number of lenders to secure additional debtor-in-possession financing for up to $700 million, according to a statement on Tuesday. Shares fell as much as 13.2% in Stockholm to a record low of 0.536 kronor per share.

The legal move comes as the Nordic region’s biggest carrier remains in talks with its creditors to convert 20 billion Swedish kronor ($1.9 billion) of outstanding debt and hybrid notes into shares while seeking to raise additional equity for about $1 billion.

SAS, which already restructured its debt in 2020, has been burdened by uncompetitive cost structure that has prevented it from reaching its full potential, chairman Carsten Dilling said in a conference call on Tuesday. Its recovery from the Covid-19 slump has been dented by personnel costs, high debt and strikes.

SAS and certain of its subsidiaries filed voluntary petitions in the U.S. Bankruptcy Court for the Southern District of New York. The airline said it expects to complete the court-supervised process within nine to 12 months.

The decision to start court proceedings was accelerated by an announcement of SAS pilots union on Monday that they would start striking with immediate effect, the carrier’s Chief Executive Officer Anko van der Werff said in the call.

SAS chose the US over other jurisdictions because it allows operations to continue while the company is restructuring, and the fleet stays under control of the company, according to the CEO.

Bankruptcy processes in the US are open to foreign companies that have assets or operations in the country.

“The chapter 11 process gives us legal tools to accelerate our transformation, while being able to continue to operate the business as usual,” said van der Werff.

In the filing, the carrier listed assets worth between $10 billion and $50 billion, and liabilities between $1 billion and $10 billion. The debt pile includes 6 billion kronor of hybrid notes bought by the governments of Denmark and Sweden during the last bailout in 2020, as well as commercial hybrid notes, lease liabilities, Swiss-franc bonds and various term loans.

The company has been struggling to get the backing of its largest shareholders for the restructuring plan.

While Denmark said it’s open to adding to its holding, Sweden’s government flagged it will accept a conversion of debt it is owed into equity, but won’t participate in a new capital raise. The two governments have a 21.8% stake each in SAS.

The Norwegian government, one of the creditors and a former shareholder of the company, also said won’t participate in a share sale.

Wallenberg Investments, the vehicle of one of Sweden’s wealthiest families and a minority shareholder, said it “fully supports” the decision to file for bankruptcy protection and pointed out how the airline had been burdened with too high costs for decades. 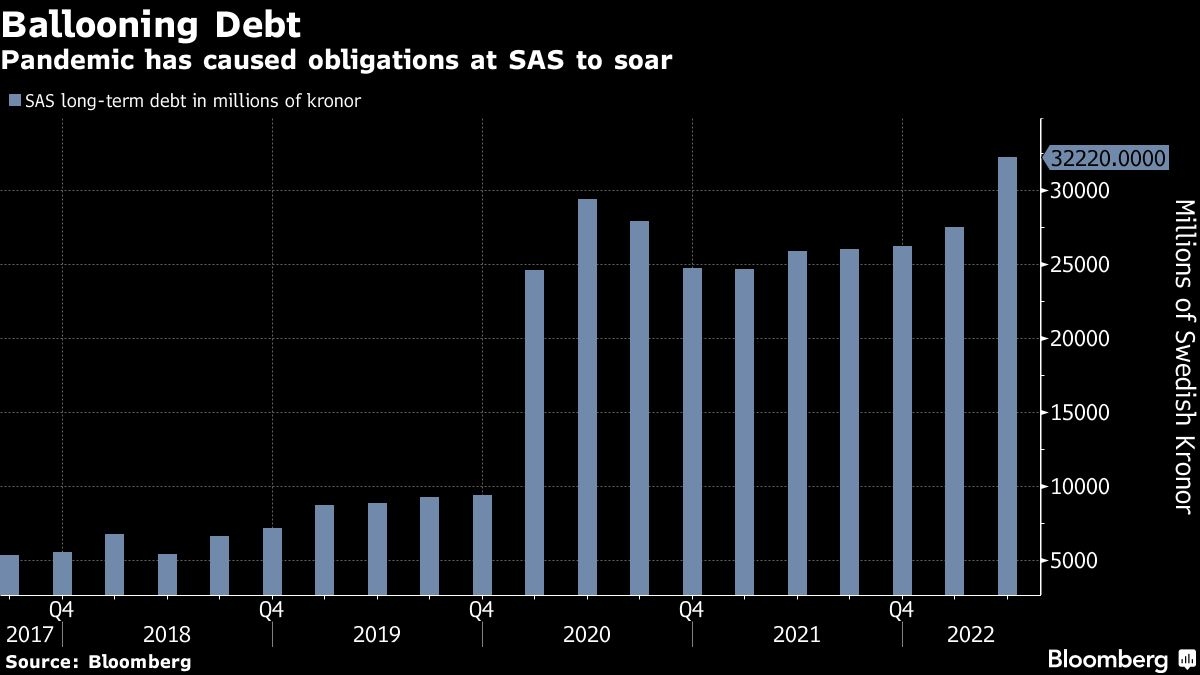