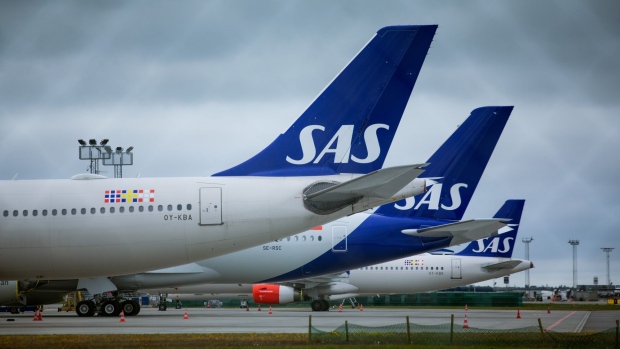 Passenger aircraft, operated by SAS AB, sit parked on the tarmac at Copenhagen Airport in Copenhagen, Denmark, on Wednesday, April 29, 2020. Scandinavia's biggest network airline, SAS, is eliminating as many as 5,000 jobs, marking the first permanent staff cuts by a major European carrier in the face of collapsing travel demand. Photographer: Carsten Snejbjerg/Bloomberg , Bloomberg

(Bloomberg) -- The managers of Scandinavia’s biggest airline SAS AB have lost the confidence of their staff -- and investors aren’t far behind.

In the latest show of discontent, it emerged that nine in ten cabin crew members have no faith in upper management and think several should resign. As many as 94% said they had doubts about the current business model, according to a poll.

The numbers, unveiled by Swedish radio program Ekot on Wednesday, show just how dire the situation has become for Chief Executive Officer Anko van der Werff, who’s been in the job for less than six months.

The CEO is pushing to make the airline a more flexible organization, and has called on staff to show “understanding” to the significant changes the airline needs to make.

Investors are also skeptical. The carrier’s stock fell as much as 8.7% on Wednesday after analysts at HSBC on Tuesday told clients to reduce holdings. The shares have lost more than a third this year, and the company is now valued at less than $1 billion. Short interest in the stock has risen to almost 18% of free float after tracking above 10% for most of this year, according to data compiled by IHS Markit.