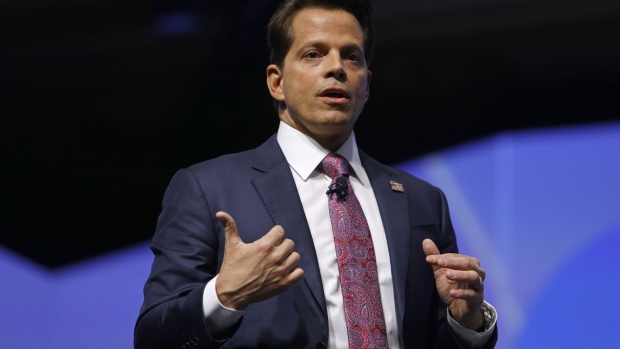 (Bloomberg) -- Anthony Scaramucci, whose curiosity about cryptocurrencies began during his short stint in Washington, now plans to pivot his SkyBridge Capital toward digital assets after years of focusing on high-profile hedge funds.

Almost half of SkyBridge’s $3.5 billion under management is linked to crypto assets including Bitcoin, the Algorand protocol, Ethereum and publicly traded, crypto-related stocks, according to Scaramucci, who returned to money management at his New York-based firm after 11 days as then-President Donald Trump’s director of communications in 2017.SkyBridge expects that the crypto focus could help triple assets to $10 billion, with digital assets representing the majority of those funds. “We feel so strongly about this opportunity that we’ve adapted and repositioned the firm to eventually be a leading cryptocurrency asset manager and adviser,” Scaramucci said in an interview.

Scaramucci spoke ahead of a SALT event this week co-sponsored with crypto exchange FTX that’s expected to draw nearly 2,000 people to the Bahamas.

Here are comments from the interview with Scaramucci and SkyBridge executive John Darsie, who helps run SkyBridge’s SALT conferences, edited for length:

BLOOMBERG: At what point did you make the decision to pivot to crypto?

If you just look at the 10 years of GDP growth, it’s roughly about 1.6%, which is below trend. I’m not saying that the inflation is forever, but if you’re going to have high inflation, at least temporarily—which I would define as 18 to 36 months—you got to put yourself in a position to be in very high-growth-oriented places. For us, we think the cryptocurrency markets represent tremendous growth. It comes with volatility, certainly, but I think over the three to five years, we’d like that trajectory.

A seminal moment for me, though, was working in Washington, because I spent some time at the Export-Import Bank. It’s hard to believe it’s five years ago now, but in June of 2017, I was at the ExIm Bank in a meeting where Treasury officials were talking about the potential digitization of the dollar. And I was like, OK, well, how are you going to do that? Over the blockchain.

Our friend Michael Saylor started making very large Bitcoin investments in August of 2020. For SkyBridge, we made our first sizable investment in December, where we put about $270 million as a macro in investment in our Series G fund. Our average price was $18,500—that’s proven to be a very good entry point. But, granted, there’s been tremendous volatility. This is not for the faint of heart—this is a long-term, strategic decision.

JOHN DARSIE: Historically, in terms of our strategy from a return perspective, it was more credit-focused. We would rotate into different types of hedge fund managers based on market conditions, but especially over the last, I would say, seven or eight years, I think our orientation was much more value in nature, where we were trying to achieve returns of around 8% to 10% to sort of act as a fixed-income replacement in an investor’s portfolio, given that traditional fixed-income returns were very poor. What we ultimately determined was that, as a result of the pandemic, we had a huge drawdown in the credit portion of the portfolio.

More broadly, we just decided to take a little bit more of a growth orientation in how we structured the fund, rather than trying to allocate and replace that fixed-income type of return. We wanted to invest in more growth-oriented managers, both in crypto and outside of crypto.

We obviously are extremely bullish on the sector. And so what we decided to do was a portion of that capital that was previously allocated to credit managers was invested directly into crypto assets like Bitcoin and Ethereum—but then also rotate capital into crypto-asset managers like Multicoin, Polychain, Pantera, people of that nature.

BLOOMBERG: You guys were among the first to be denied by the SEC in terms of a spot ETF for Bitcoin. How do you expect the SEC to go about their handling of crypto regulation?

AS: We’ve taken the position that the government is going to be, call it, “mama bear” regulation. They won’t over-regulate the crypto space, they’re certainly not going to under-regulate it.

We think we’re early. So if we’re right, and you get a cash ETF, that opens the floodgates for more institutional and retail investing. We’re trying to condition our clients to be early alongside of us. So that makes sense. Our application was denied alongside of Fidelity’s and several others. So it wasn’t specific or personal to us.

I think the SEC is taking the position that because the cash trading of Bitcoin is happening all over the world, that they don’t have a one-market clearing for all buys and sells. So they’re worried about price manipulation. But over time, because of the transparency of the markets, I think they’re going to get more comfortable with it.

Now the Big Kahuna is the Grayscale Bitcoin Trust. They have basically filed to convert their trust, which is trading at a discount. They want to convert into an ETF, which would reduce their fees, but it would just be better for clients. They’re publicly out there saying, if the SEC doesn’t approve it, then they have a July 1 deadline, they’re going to bring a lawsuit against the SEC.

BLOOMBERG: If Grayscale brings a lawsuit against the SEC, would you somehow sign on or agree with it—support it in any fashion?

AS: The short answer to that is no, we wouldn’t sign on to it, because we’re in the process of refiling with the SEC our Bitcoin ETF application. I’m taking the approach that eventually the SEC is going to get to the position where they allow for a cash Bitcoin ETF. So I don’t think we need to be that aggressive.

There’s a frustration in the industry, that our regulators appear to be behind other regulators. Now, having said that, they’re concerned about investor safety. So we’re very pro-regulation. We also think they’re going to come out on the right side of it, which is why we’re encouraging our clients to come in now, before the additional waves of investor demand and interest that come post-regulation.