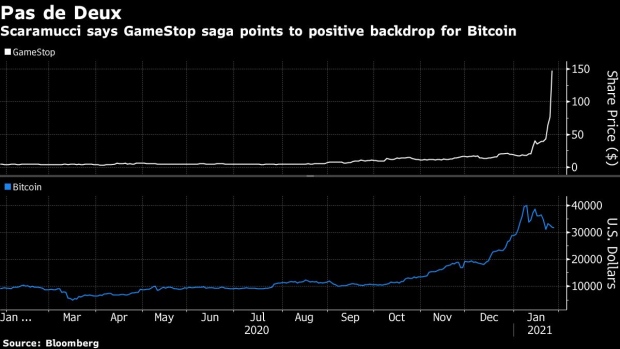 (Bloomberg) -- The growing number of retail traders sidestepping Wall Street to power rallies in stocks like GameStop Inc. points to a positive backdrop for Bitcoin, according to SkyBridge Capital’s Anthony Scaramucci.

That’s because the phenomenon exemplifies financial decentralization, the guiding idea behind Bitcoin, he said. Smartphones and low-cost trading are “democratizing” the formerly insular and highly concentrated business of money management, he added. SkyBridge has an overall Bitcoin exposure of around $385 million.

“The activity in GameStop is more proof of concept that Bitcoin is going to work,” Scaramucci said in an interview. “How are you going to beat that decentralized crowd? That to me is more affirmation about decentralized finance.”

Bitcoin, which has more than tripled in the past year, is underpinned by a digital ledger distributed across computer networks rather than a central authority. Proponents argue it’s emerging as an alternative to gold for investors seeking to hedge risks such as faster inflation. Critics see a speculative mania reminiscent of Bitcoin’s boom and bust three years ago.

Euphoria born in day-trader chat rooms has powered a near-700% rally in GameStop this year, turning it into a symbol of the power of individual investors over traditional institutions who see no logic in the rally. There are also calls for a Securities and Exchange Commission investigation amid concern that the chat-room posts are part of an illicit scheme to manipulate the market.

“It’s the age of the micro investor and you better take it seriously, otherwise you’ll get taken to the cleaners,” Scaramucci said.