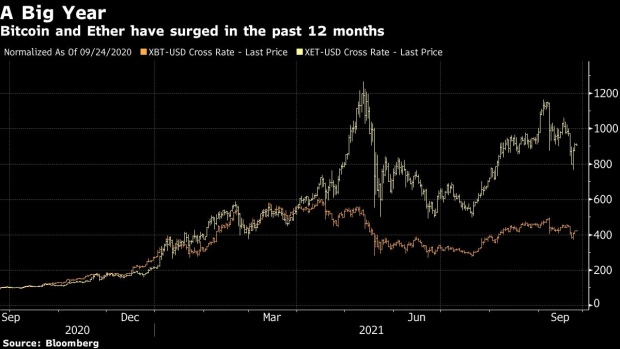 The new asset class is dominated by what Scaramucci estimates to be about 10% of the financial-service community, he said in an interview Wednesday, calling it a “feeding frenzy” that reminded him of the 1990s dot-com boom.

“The institutions are not there,” Scaramucci said. “Anybody who’s telling you there’s institutional adoption into this space is not being totally honest -- or they’re seeing something that I’m not seeing.”

When and how traditionally mainstream money managers, including sovereign wealth funds and state and local pension funds, might buy in to cryptocurrencies has become a hot debate in the industry. Prices have surged and banks have rushed to add offerings for clients. Financial firms like Fidelity Investments, which provides institutional services, is beefing up related staffing and preparing for growth.

However, price volatility and regulatory uncertainty loom large over the industry, keeping more conservative wealth managers on the sidelines and raising questions about whether cryptocurrencies are appropriate for retail investors.

Scaramucci also predicted that one of the big banks, frustrated by the growing footprint of decentralized finance, will “end up buying a Coinbase or something crypto-related to make that transformation” more quickly than he’d initially thought.

And, he said, investors are thinking more flexibly about their mandates. Hedge funds are moving into private equity and venture capital, and venture capital firms are holding their shares longer than they used to, post-IPO. SkyBridge, too, is taking stakes in more private companies, including Chime, Plaid, Klarna and Genesis Digital Assets. “That’s stuff we wouldn’t have done 10 years ago and that is accelerating,” he said.

At the SALT conference earlier this month, Scaramucci announced an Algorand fund, which he’s expecting to launch in coming months, to add to existing Bitcoin and Ethereum funds. And earlier this week, he launched the First Trust SkyBridge Crypto Industry and Digital Economy ETF (ticker CRPT), which, he says, will focus on 30 publicly traded companies that are going to “lead the charge” in the world of decentralized finance.