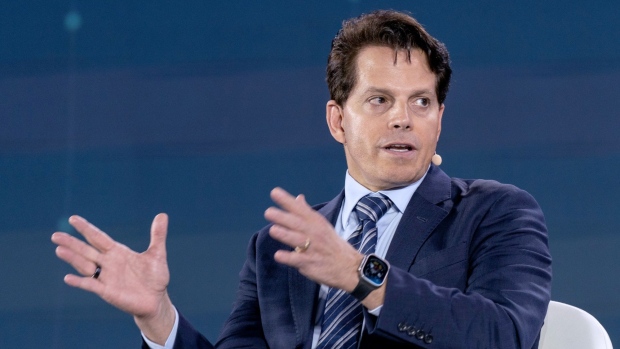 (Bloomberg) -- Investor Anthony Scaramucci said he expects the Federal Reserve will pause its campaign to raise interest rates before reaching its 2% inflation goal, leading to a rally in risk assets.

“I do believe that the Fed declares victory at 4% to 5% inflation,” Scaramucci, founder of SkyBridge Capital, said in an interview. “If I’m right, there will be a resurgence in the market. There’ll be a lot of short covering in crypto and there’ll be a rebirth of risk assets.”

SkyBridge has approximately 10% exposure to Bitcoin in the SkyBridge Multi-Adviser Hedge Fund Portfolios Series G fund, based on month-to-date estimates, a spokesperson said. Scaramucci said he doesn’t see adding to his Bitcoin position in the fund, and may “scale into other things as Bitcoin goes up.”

SkyBridge accepted $45 million in funding from Sam Bankman-Fried before the collapse of his digital empire FTX.  From that influx of cash, Scaramucci said SkyBridge purchased $10 million in FTX’s token FTT and sold it at a loss of $9.6 million.

“I don’t shy away from it,” Scaramucci said. “I think it’s important for people who believe in capitalism and important for people that are risk takers to understand what happened. I’m not going to be the person that takes no more risk in the future because I got burned by Sam.”

Scaramucci said the “rampant pessimism” on cryptocurrency that he saw expressed by global leaders at the recent World Economic Forum in Davos, Switzerland is “enormously bullish.”

--With assistance from Scarlet Fu.