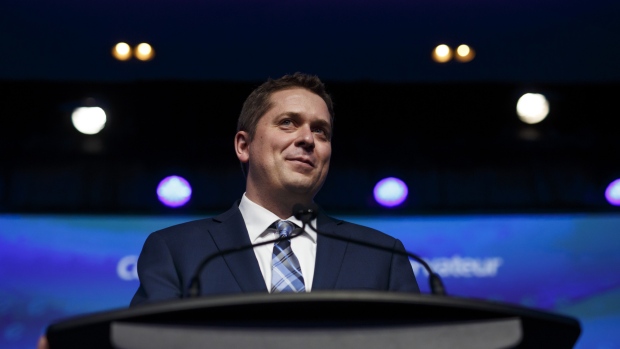 The Conservative leading in polls ahead of Canada’s fall election won’t reopen the country’s recent trade deal with the U.S. and Mexico, a spokesman says.

Andrew Scheer, whose party is beating Prime Minister Justin Trudeau’s Liberals in polls, has been a regular critic of the trade deal -- referred to as the USMCA in the U.S., and CUSMA in Canada -- including in a keynote foreign policy speech delivered on Tuesday. The U.S., Canada and Mexico signed the pact in November, which will replace the North American Free Trade Agreement. It still needs to be ratified.

“Canadians had to accept a worse deal on NAFTA after Mr. Trudeau and his negotiating team turned critical trade negotiations into a parade of photo-ops, sound bites, and orchestrated media leaks,” Scheer said in his speech. He has regularly criticized Trudeau for “capitulating” and his “failure to get a better deal.”

His speech was silent on whether Scheer supports either ratifying the deal as is, despite what he sees as shortcomings, or seeking changes, as some American lawmakers are attempting amid push-back from U.S. business. However, a spokesman said the Canadian opposition leader wouldn’t reopen the deal if elected.

Scheer “will not seek to reopen NAFTA negotiations, but rather will work to mitigate the damage caused by Justin Trudeau’s capitulation by working to get a deal on softwood lumber and to remove steel and aluminum tariffs,” Daniel Schow, a spokesman for Scheer, said by email after the speech.

Foreign Minister Chrystia Freeland has said reopening the pact “could really be a Pandora’s box.” Trudeau’s government is running out of time to pass the new trade deal through parliament before the campaign begins, and has warned it may not do so if U.S. tariffs on Canadian steel and aluminum remain in place.

Canada’s election is scheduled for Oct. 21. Scheer’s Conservatives lead Trudeau’s Liberals by 6 percentage points, according to a polling aggregator maintained by the Canadian Broadcasting Corp, which projects a likely minority government in parliament.