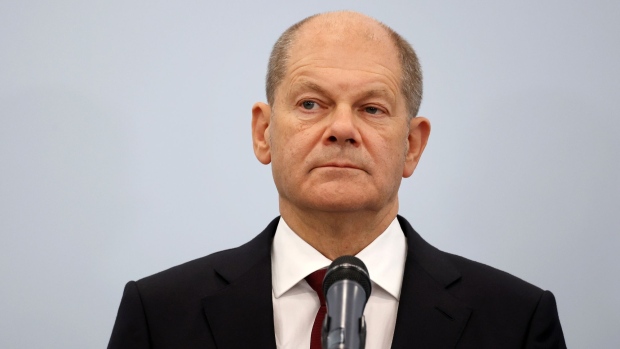 Olaf Scholz, Germany's finance minister and chancellor candidate for the Social Democratic Party (SPD), attends a statement to the media after exploratory coalition talks in Berlin, Germany, on Friday, Oct. 15, 2021. Scholz reached a milestone in his bid to succeed Angela Merkel as German chancellor by getting his potential partners close enough to enter formal negotiations for a coalition government. , Bloomberg

(Bloomberg) -- Germany’s Social Democrat are aiming to wrap up coalition talks with the Greens and the FDP in time for their candidate, Olaf Scholz, to be sworn in as chancellor in the second week of December, Party Secretary Lars Klingbeil said Thursday.

The three parties aim to present a coalition agreement by the end of November, Klingbeil said before the start of the talks in Berlin Thursday.

As formal coalition negotiations begin, the parties have set up 22 working groups to draw up a detailed policy program.

“This will be highly complex process,” Green party official Michael Kellner said. The Greens are aiming to lock in financing of as much as 50 billion euros ($58 billion) to tackle climate change.

Bundesbank President Jens Weidmann has added an extra element to the negotiations with his announcement on Wednesday that he will step down as head of the central bank at the end of the year.

Klingbeil said that he expected that the next government would eventually address the issue of nominating a successor to Weidmann.