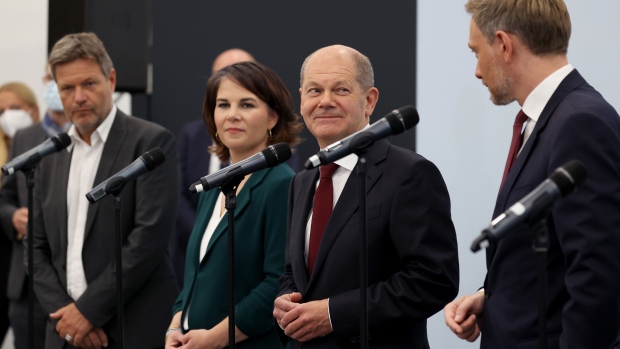 Germany’s prospective ruling coalition is targeting about 500 billion euros ($580 billion) in spending over the coming decade to address climate change and will seek loopholes in constitutional debt rules to raise the financing.

Robert Habeck, co-leader of the Greens, said the Social Democrats and the pro-business Free Democrats have agreed on the scale of public investment needed to make Europe’s largest economy climate-neutral, and the parties will hammer out details over the next four to six weeks.

“There’s a clear understanding of leveraging public investment activities in Germany within the framework of the debt brake, but with the possibilities that the debt brake allows,” Habeck said in interview with ARD television.

As an example, he said the government could create funds that invest in electric-car charging stations in rural areas. “That can then be carried out in the various areas of public infrastructure,” said Habeck, who is one of the candidates under discussion for finance minister.

The Greens agreed on Sunday to proceed to talks to form a three-way alliance led by Social Democratic election victor Olaf Scholz. The FDP is expected to sign off on the step at a meeting on Monday.

Christian Lindner, the party’s chairman, is also under consideration for finance minister and indicated in a separate interview with ARD that the Greens should get to control a new, more powerful environment ministry.

Along with policy details, cabinet posts will be sorted out in the coalition negotiations, which could start as soon as this week. By securing a preliminary commitment from his prospective partners on Friday, Scholz cleared a major hurdle in his bid to succeed Angela Merkel as chancellor.

While disputes are still possible, proceeding to coalition negotiations is a critical step in Germany’s complex process of transferring power. It shows the parties see enough common ground and makes it more likely that a Scholz-led government can start running Europe’s largest economy before the end of the year.