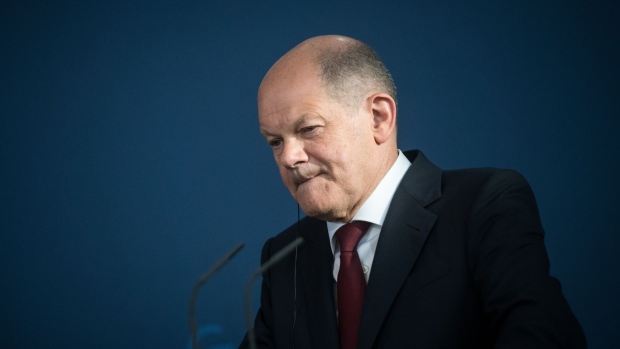 Olaf Scholz, Germany's chancellor, during a press conference with Emmanuel Macron, France's president, at the Chancellery in Berlin, Germany, on Monday, May 9, 2022. Scholz and Macron reaffirmed their commitment to support Ukraine while strengthening the European Union and announced a special summit to discuss bids by Western Balkan countries to join the bloc. Photographer: Stefanie Loos/Bloomberg , Bloomberg

(Bloomberg) -- German Chancellor Olaf Scholz faces another tricky electoral test on Sunday, with polls suggesting his Social Democratic Party could suffer a second setback in a week in a regional ballot.

Some 13.2 million people are eligible to vote in Germany’s most populous state of North Rhine-Westphalia, a heavily industrialized western region that was once an SPD stronghold but has been ruled by the Christian Democratic Union since the most-recent election in 2017.

The latest vote is also taking place under the shadow of the war in Ukraine. Scholz’s approval rating has slumped after he was criticized at home and abroad for foot-dragging on supplying Kyiv with heavy weapons and for blocking an immediate ban on Russian energy imports.

Just last week, the SPD suffered its first defeat in a regional election since Scholz took office in December, tumbling to an historic low in the northern state of Schleswig-Holstein. The CDU, the main opposition party at the national level, romped to victory thanks to its popular incumbent.

In a poll for NRW published Thursday, support for the SPD was at 29%, two points below its result in the election five years ago. The CDU, led by current state premier Hendrik Wuest, was on 32%, down one percentage point from 2017, according to the survey for public broadcaster ZDF.

The first exit polls on Sunday are due to be published at 6 p.m. local time.

The Greens are projected to nearly triple their share of the vote, coming in third with 17% and continuing their surge since joining the ruling coalition in Berlin with the SPD and the business-friendly Free Democratic Party.

The FDP, the junior partner in the current government in NRW, is projected to lose about half its backing to 6%, while the far-right Alternative for Germany is seen stable at around 7%. Another poor performance by the FDP could increase tensions within the ruling coalition at the federal level.

Even if the SPD comes in second, its candidate Thomas Kutschaty has suggested that he could try to form a government with the Greens and FDP. Because of the drop in support for the FDP, Wuest would have to convince the Greens to join a coalition government so that he could remain regional premier.

Scholz has responded to criticism of his Ukraine policies by approving the delivery of some heavy weapons and by taking a more visible role on the international stage. His government has also backed European Union plans to halt imports of Russian oil and coal.

The shift was welcomed this week by Ukrainian Foreign Minister Dmytro Kuleba on a visit to Germany. In an interview with public broadcaster ARD on Thursday, Kuleba said that Germany was now a driving force in Europe on supplying his country with arms and imposing tougher sanctions on Russia.

Scholz’s party did pull off a resounding victory in a regional vote in Saarland at the end of March. The SPD won control of the small western state for the first time in 23 years and enough seats to rule without a coalition partner. Support for the CDU slumped by more than 12 percentage points, in part due to a weak campaign by the incumbent premier.