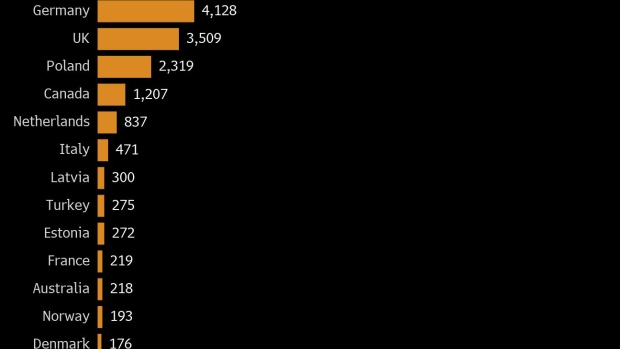 (Bloomberg) -- Chancellor Olaf Scholz managed to secure the broad international alliance he wanted before sending German battle tanks to Ukraine, but the tortured process to get there may have hurt his reputation.

Amid signs that Russia is amassing troops and weapons for a fresh offensive, Scholz left the Ukrainians hanging for more than two weeks as he stared down the US and brushed off the increasingly strident demands from his European partners to allow German-made Leopards to be delivered to the war zone. He finally consented on Wednesday after wringing an agreement from President Joe Biden that the US would also send its tanks.

Almost a year after Scholz promised that the Russian invasion would bring about a historic turning point, or ‘Zeitenwende,’ for Germany, the outcome shows that the 64-year-old chancellor can get his way on the world stage. But it also raises questions about his priorities, and whether Germany can be counted on to lead.

“Scholz’s long hesitation has damaged Germany’s reputation as a reliable partner,” said Marina Henke, director of the Berlin-based Hertie School’s Centre for International Security. “It raised doubts about the extent to which Scholz is really serious about his promised ‘Zeitenwende’.”

Scholz defended himself in comments to public broadcaster ZDF late Wednesday. “I say very clearly and sharply, that it would have been irresponsible to act differently.”

After a frustrating meeting on Friday at the US airbase in Ramstein, Germany, failed to produce a deal, Scholz got the US to agree to supply M1 Abrams tanks, joining Challengers from the UK. Germany will send 14 Leopards in a first step, and the Netherlands is considering supplies as well. Poland and Finland are also set to be part of the mix that ultimately aims to deliver more than 100 tanks to Ukraine.

The government in Warsaw was particularly vocal in putting pressure on Scholz. In the aftermath of the Ramstein meeting, Mykhailo Podolyak, an adviser to Ukrainian President Volodymyr Zelenskiy, said the indecision was “killing more of our people,” while the Baltic countries also offered their own rebukes with Edgars Rinkevics, the Latvian foreign minister, saying there was “no good reason” for delay.

“It was right and it is right that we did not allow ourselves to be pushed but chose, and will continue to choose, this close cooperation,” Scholz told German lawmakers in the Bundestag Wednesday. “We will continue to ensure that this support is possible without the risks for our country increasing in the wrong direction. That is why we are doing it this way.”

Ekkehard Brose, president of the Federal Academy for Security Policy, said in a statement that thanks to Scholz’s insistence on making the battle tank decision in lockstep with the US, the Biden administration remained involved in risk-sharing with Europe. “After all, Europe on its own is too lightweight to expose itself to a nuclear-armed Russia,” Brose added.

The criticism that rained down on Scholz overlooks the fact that Germany has provided more military gear to Ukraine than any other country besides the US. The chancellor has cast aside his country’s historical refusal to send weapons into combat zones, and moved from supplying helmets at the start of the war to state-of-the-art tanks a year later.

Scholz has also liaised closely with Biden on earlier decisions to send multiple rocket launchers, armored combat vehicles and Patriot air-defense missiles to Ukraine. The Leopard 2 — developed by German defense contractors Krauss-Maffei Wegmann and Rheinmetall AG — is one of the world’s most powerful battle tanks and can hit targets at a distance of 5 kilometers (3 miles).

But the reality is that for all Scholz has delivered, many of his allies are looking for more and the painful and drawn-out deliberations before each decision have frustrated those looking to Germany to provide leadership within the European Union. The first Leopard’s aren’t due to arrive for at least two months, and the next Russian offensive may come before then.

The US has pushed Berlin for years to spend more on defense and live up to its NATO obligations. Scholz has moved in that direction. Shortly after Russia’s invasion last February, he announced a landmark €100 billion ($109 billion) fund to modernize the Bundeswehr and a ramp up in annual defense spending.

The uncertainty with which he’s followed up on that announcement may be gnawing at Scholz’s authority with voters too. His Social Democrats have been in steady decline since the 2021 election, and only 25% of German voters see him as a strong leader, according to a Forsa poll commissioned by Stern magazine.

But that’s unlikely to deter the chancellor from the slow-and-steady approach that has allowed him to weather setbacks in the past. In 2019, he lost a bid to run Germany’s Social Democrats, but then bounced back to win the election to succeed Angela Merkel.

His approach however may bring its costs.

Before the Ramstein meeting, US officials had argued that German-made Leopard tanks are better-suited for combat in Ukraine than the heavier and more complex Abrams, putting pressure on Scholz to take the lead. US officials had expected that Scholz would at least allow other EU countries to send their Leopards to Ukraine, even if Germany itself wasn’t ready to deliver its own.

The chancellor’s refusal to move stirred irritation from the US contingent, according to one official with knowledge of the discussions.

“The behind-the-scenes dissent in the runup to the meeting in Ramstein will not permanently strain German-American relations — the personal relationship between Scholz and Biden is far too good,” said Liana Fix, a fellow at the Washington-based Council on Foreign Relations.

All the same, she said, Scholz has used up some of his credit with the White House by forcing them to supply Abrams when it was clearly not their preference.

“The U.S. is quite willing to take off its gloves,” she said. “It could be an indication that the Biden administration’s surprisingly great patience with the Germans on the subject of security and defense has now been exhausted and this means it’s treating Germany now as just like any other ally.”

--With assistance from Patrick Donahue, Iain Rogers and Arne Delfs.