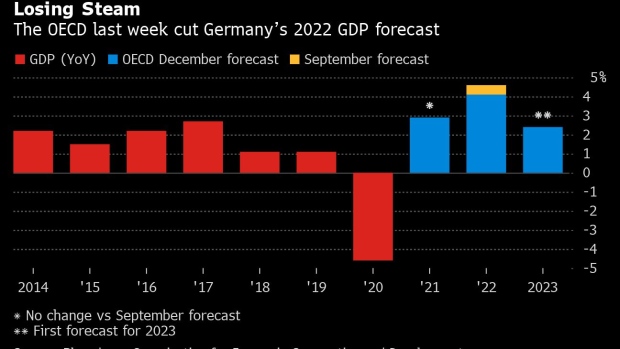 Olaf Scholz, Germany's incoming chancellor, during a presentation ceremony of new government ministers in Berlin, Germany, on Monday, Dec. 6, 2021. Scholz named the seven ministers from the SPD who will be in the new government, including Christine Lambrecht as Germany’s third-consecutive female defense minister and one of four women in the cabinet. , Bloomberg

Olaf Scholz is about to become chancellor of an unhealthier German economy than the one he looked set to inherit when his party won elections in late September.

With the Social Democrat leader poised to be sworn in as Angela Merkel’s successor on Wednesday, growth prospects have soured in the weeks it took to negotiate a three-way coalition with the Greens and the Free Democrats.

Data on Monday underscored the deterioration in Europe’s biggest economy, showing a slump in factory orders that was far worse than any analyst predicted as foreign demand plunged. That followed last week’s revelation of a once-in-a-generation cost-of-living squeeze for German consumers as inflation topped all estimates to reach 6% -- the highest since the early 1990s.

Soaring prices should ease next year and the economic recovery is forecast to gather pace. But with this week’s numbers adding a “further damper” to the outlook according to the government -- even before the impact of the omicron coronavirus variant is felt -- the near-term headwinds for Scholz are mounting and may threaten Europe as a whole.

“We have to get through a winter of bad news,” according to Holger Schmieding, chief economist at Berenberg, who warns of a “serious risk” that German output will shrink in the fourth quarter as supply-chain disruptions continue to restrain its manufacturing industry.

But while another big wave of the pandemic would delay the recovery, it won’t derail it completely. “It’s a question of whether the strong growth starts in the first quarter or the second,” he said.

Schmieding’s remarks chime with an OECD assessment released last week. Describing how global supply snarls are holding back the export-reliant economy, the Paris-based organization cut its German growth forecast for 2022 by half a percentage point to 4.1%, compared with its interim outlook released just days before the Sept. 26 election.

It still predicts expansion will pick up next year, underpinned by accelerating consumer spending, improving confidence and “solid” investment. But its forecasts were largely compiled before news of omicron broke, and officials highlighted other risks -- from renewed lockdowns to spiraling prices.

It’s the threat of inflation that Scholz is being asked about more than growth as he fills the power vacuum created by the lengthy coalition talks. He said last week that “we have to do something” if prices don’t slow as analysts predict, without specifying what any action may entail.

“We shouldn’t be aiming for high inflation like we have today,” he told Bild TV.

Among the new chancellor’s first economic decisions is choosing a new Bundesbank president to replace Jens Weidmann, who leaves this month. The appointment comes as the European Central Bank, like Scholz, faces increasing scrutiny over elevated inflation and as it prepares to revamp its stimulus programs, though Weidmann will still be around for a key Dec. 16 decision on bond-buying.

In due course, Scholz’s coalition plans other major policy initiatives with economic ramifications -- such as a ramp-up in investments to retool the economy, though its scope remains undetermined.

In the more immediate term, data set to arrive before his inauguration include October industrial production numbers on Tuesday that are expected to show only a partial recovery of 1% after two months of declines. Underlining the current uncertainty, there’s a range of 5 percentage points in the 33 forecasts collected by Bloomberg -- including some predicting another drop.

There may be more disappointment. Later on Tuesday, the Mannheim-based ZEW institute will release its survey of investors, predicted by analysts to show expectations at a six-month low in December.

For JPMorgan economist Greg Fuzesi, Germany is in for “more difficult” quarters either side of the New Year than the new chancellor may have expected.

“Restrictions and consumer caution are going to weigh on services activity over the winter period -- mobility has already moved somewhat lower,” he said. “But at the same time, you have signs of an improving picture for manufacturing and car production. And there’s scope for faster growth across the economy after the winter drags fade.”