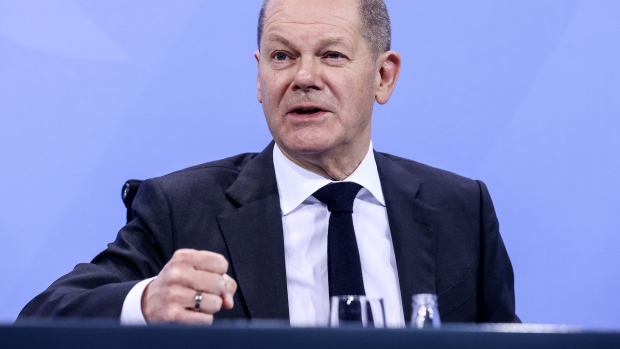 (Bloomberg) -- Olaf Scholz called on his party to make the fight against the coronavirus the new German government’s foremost task as his party prepares to approve the coalition agreement that moves him a step closer to replacing Angela Merkel as chancellor.

“It is clear that our first and most important task is to protect the health of the citizens and to fight the pandemic,” Scholz, who is due to be sworn in on Wednesday, said in a speech to SPD delegates.

Scholz’s Social Democrats are expected to approve a 177-page coalition accord that outlines the government’s plan for the next four years at a party congress in Berlin. The pro-business FDP is set to approve the deal at a meeting Sunday, while the Greens are waiting for the results of a membership ballot that will conclude on Monday and is also likely to endorse the agreement.

Merkel, 67, who is stepping aside from politics, has remained in charge as caretaker chancellor since the SPD’s narrow victory in September’s national election.

The complex negotiations needed to forge an alliance of three parties led to a prolonged transfer of power which has complicated the battle against a brutal surge in Covid-19 infections.

Clashes are likely within the new coalition on financing and climate. FDP Chairman Christian Lindner, who has called for budget discipline, will become finance minister, while the Greens under Robert Habeck and Annalena Baerbock want the government to spend freely to meet Germany’s ambitious climate targets.

Habeck will become Scholz’s vice chancellor and run an influential combined economy and climate ministry, while Baerbock will become foreign minister. The SPD has said it will announce its cabinet picks on Monday, including who will take over the health ministry.

Despite nearly two months of intense negotiations behind closed doors, many of the proposals spelled out in the coalition accord remain vague. There are different views on what needs to be done to ensure progress for Germany, Scholz told SPD delegates. But doing nothing against climate change would be too “dangerous”, he said.

Climate protection policies are a work in progress that the parties only intend to finalize by the end of next year. Much of the spending for the country’s technological overhaul will depend on private investors, as the coalition agreed to stick to constitutional borrowing restrictions.