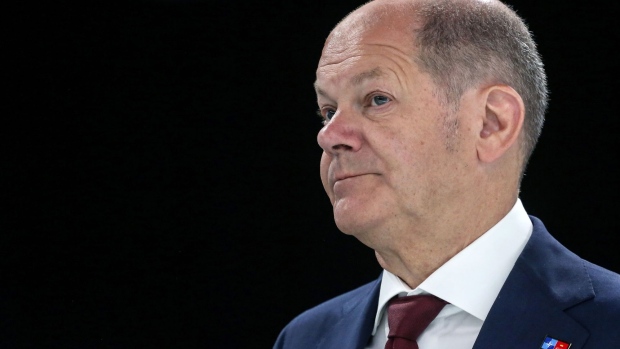 Olaf Scholz, Germany's chancellor, at a meeting on the final day of the North Atlantic Treaty Organization (NATO) summit at the Ifema Congress Center in Madrid, Spain, on Thursday, June 30, 2022. NATO's so-called Strategic Concept said in the text that China's stated ambitions and coercive policies "challenge our interests, security and values" and warned about a deepening strategic partnership between Beijing and Moscow. , Bloomberg

(Bloomberg) -- Chancellor Olaf Scholz said Germany needs to act quickly to tackle an “historic” surge in the cost of living, comparing the situation to the inflation crisis of the 1960s and 70s.

The German leader convened representatives from employers, unions and the Bundesbank to come up with measures to ease the pain for consumers. The goal of the rare joint effort is to develop inflation-fighting policies in the coming weeks, he said on Monday after the first meeting.

“The current crisis won’t be over in the next few weeks.” Scholz said outside the chancellery in Berlin. “We must be prepared that this situation won’t change for the foreseeable future. To put it differently, we are facing a historic challenge.”

The German government is showing greater urgency to address a surge in prices that risks intensifying as gas costs soar after Russia slashed supplies. In an interview with ARD television on Sunday, Scholz said that rising costs of living could have “explosive” effects on German society by driving deeper divisions between rich and poor.

“For me it’s important to send the message: We’re standing united,” he said on Monday. “We want that all citizens get through these times well.”

Since taking office in December, Scholz’s three-party coalition has passed two packages to cushion the impact of higher costs. The measures worth more than 30 billion euros ($31.4 billion) include waiving a surcharge on electricity, steeply discounting public-transport tickets and providing one-off payments of 100 euros per child and 300 euros for each income-tax payer.

While the policies helped slow inflation to 8.2% in June from 8.7% in May, the level doesn’t yet fully account for higher energy costs. When elevating its alert level to the second-highest “alarm” stage, the government held off on legislation that would allow utilities to pass prices on to customers. Officials have warned that consumer bills could double or triple.

Scholz has said next year will be a bigger challenge, as debate rages within the government over the type of support to offer and how to finance it. Finance Minister Christian Lindner has pushed backed against more debt-financed relief.

Yasmin Fahimi, the head of the German trade-union federation DGB who took part in the talks, has called for an energy price cap for households and suggested the government should postpone next year’s planned increase of its price on industrial carbon emissions.

Scholz pointed to Russia’s war in Ukraine and pandemic-related disruptions in international supply chains as the main drivers of the current jump in inflation. DGB boss Fahimi and Rainer Dulger, head of the BDA employers group, both said that wages weren’t currently among the factors driving up consumer prices.

Dulger called on the government to lower the income tax for workers and expand schemes to make one-time payments tax-free.

“Our society is strong, much stronger than suggested from time to time,” Scholz said. “Our country is shaped by the fair balance of interests in a spirit of common sense. This spirit is to be maintained and also strengthened.”