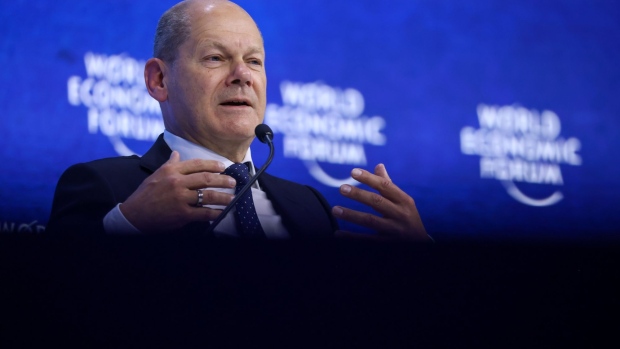 Olaf Scholz, Germany's chancellor, answers questions after delivering his special address on the closing day of the World Economic Forum (WEF) in Davos, Switzerland, on Thursday, May 26, 2022. The annual Davos gathering of political leaders, top executives and celebrities runs from May 22 to 26. , Bloomberg

Scholz’s comments are part of a shift in tone on China, which became Germany’s biggest non-EU trading partner over the past two decades. In a World Economic Forum speech on Thursday, he called out alleged abuse at detention for ethnic Uyghurs in the Xinjiang region, saying “violations of human rights” can’t be ignored.

Citing existing European Union sanctions on China for human rights in the Xinjiang region, Scholz said Friday that his government wouldn’t shy away from addressing the matter.

“I think it has to play a role for us,” Scholz said during a panel organized by the Stuttgarter Zeitung newspaper. “It can’t be that we simply don’t talk about it. It has to be addressed, it has to be an issue.”

“And we mustn’t pretend that just because we do good business with someone, because it’s a big and powerful country and will continue to be so -- that we have to keep quiet about it,” Scholz said. “That’s not on.”

Asked if German companies should stop doing business with China, Scholz cautioned against a complete withdrawal or an economic decoupling. Still, he advised companies to be more careful and do more to diversify their supply chains and foreign markets.

“Whether it’s sales markets or supply chains, I think some people were a bit careless in the past,” Scholz said. That also applies to Germany’s dependence on Russian energy imports, he said.

“Many companies have to face it -- namely that in the past they often violated against what they had learned in their business administration studies at university at the beginning: that you do not to put all your eggs in one basket,” Scholz said.