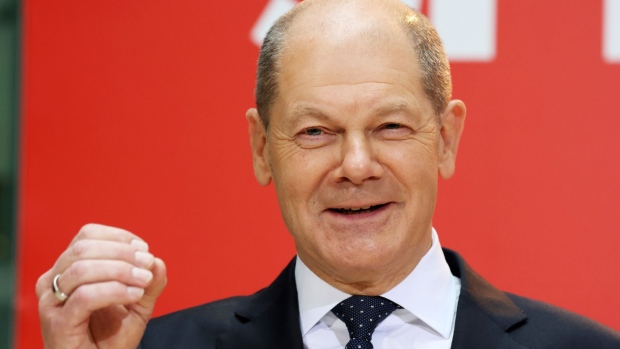 Olaf Scholz, Germany's incoming chancellor, speaks to the media during a presentation ceremony of new government ministers in Berlin, Germany, on Monday, Dec. 6, 2021. Scholz named the seven ministers from the SPD who will be in the new government, including Christine Lambrecht as Germany’s third-consecutive female defense minister and one of four women in the cabinet. , Bloomberg

(Bloomberg) -- Olaf Scholz cleared the final hurdle on his path to becoming German chancellor when Green Party members overwhelmingly approved the coalition deal with his Social Democrats and the Free Democrats.

The Greens said that 86% of some 71,000 members who voted backed the accord, which includes an ambitious climate agenda and plans to upgrade Germany’s technology infrastructure. The SPD and pro-business FDP each approved the alliance at special party meetings over the weekend, where support exceeded 90%.

The Greens are under pressure to deliver on their pledge to protect the environment, and have faced grumblings that the coalition pact fell short on issues such as speed limits on German highways and wielding a climate veto on government policy.

For the Greens’ activist base, some elements have been a hard sell -- especially ceding the Transport Ministry to the FDP, which will oversee auto emissions targets and the shift to electric mobility.

Scholz and his government will be sworn in by the lower house of parliament on Wednesday, taking the helm of Europe’s largest economy from Angela Merkel and bringing her 16-year tenure to an end.

The Social Democrat, whom many in Germany had written off as recently as the summer, staged a surprise comeback victory in September’s national election. He then spent most of two months forging an alliance between parties with starkly different policies in key areas, including finance.

Germany’s ninth post-World War II chancellor will first have to tackle a surge in Covid-19 infections, which has been compounded by a lagging vaccination rate. On Saturday, Scholz told his party that fighting the pandemic will be “our first and most important task” after the government takes office.

The 177-page coalition accord bears the finger prints of each party. Scholz’s SPD secured a minimum-wage increase to 12 euros ($13.56) an hour and pension guarantees; the Greens brought the country’s coal-exit date forward to 2030; and the FDP won out on a promise not to raise taxes and to preserve constitutional debt limits.

FDP Chairman Christian Lindner, who secured 92% backing for the coalition at a party conference on Sunday, will become finance minister, succeeding Scholz.