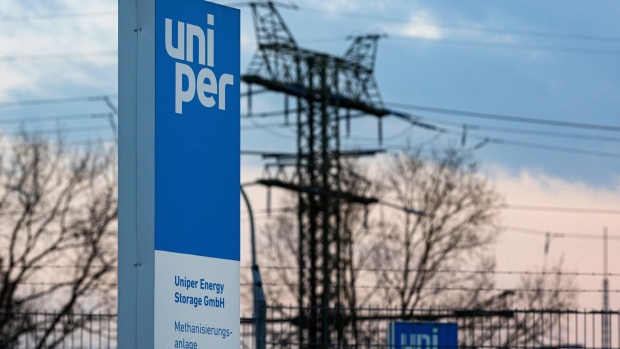 Signage for the Falkenhagen Power-to-Gas Pilot Plant operated by Uniper NV in Falkenhagen, Germany, on Monday, May 2, 2022. The pilot plant developed by Uniper, which posted a quarterly loss as it opted to keep natural gas in storage to sell later at higher prices, converts wind power into hydrogen and synthetic methane. , Bloomberg

(Bloomberg) -- German Chancellor Olaf Scholz said his government is continuing talks on aid for gas giant Uniper SE, and signaled that bailout tools developed during the pandemic to rescue big companies like Lufthansa are on the table again.

“During the last crisis, we developed very precise instruments -- and I drove this forward as finance minister -- in order to support companies that have come under pressure from circumstances for which they are not responsible,” Scholz said in an interview with public broadcaster ARD on Sunday.

Germany’s economy ministry has confirmed that talks are under way after the sharp rise in gas prices and Russia’s moves to slash deliveries hobbled the Dusseldorf-based company.

Uniper is “a big company and we said we’re going to work with the company to see what can be done,” Scholz said.

The Social Democrat chancellor said that the government’s aim was to shield both suppliers and consumers from the spike in gas prices that’s followed a reduction of gas flows by some 60% through a key pipeline from Russia.

“It’s important to be active in both fields. We are already doing that, by the way, the many loans that we are making available for the companies that are active as suppliers in this area are helping to ensure that the prices have not yet hit through,” Scholz said.

Regarding Uniper, Scholz added that the government “is discussing very closely with the company what is the best way to ensure that the gas supply does not suffer just because a very important company is no longer able to continue its business.”

Analysts estimate that the Russian gas cut is costing Uniper 30 million euros a day. If the government was to put up enough money to rescue Uniper for a year, that would translate into costs of some 11 billion euros ($11.4 billion).