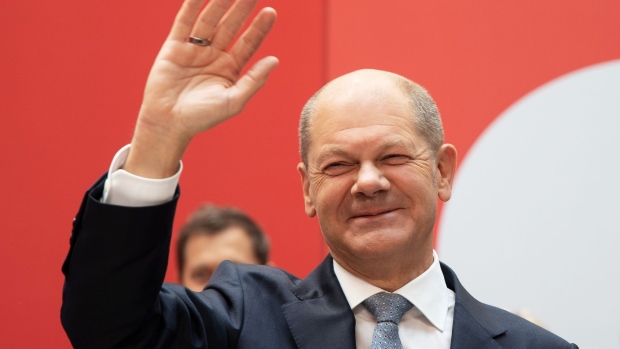 Covers on fuel pumps reading "Sorry out of use" at an Esso petrol station in Brighton, U.K., on Monday, Sept. 27, 2021. The U.K. government took emergency measures late Sunday to try to ease acute fuel shortages across the country, as gasoline retailers shut pumps after days of panic buying. Photographer: Hollie Adams/Bloomberg , Bloomberg

With the U.K. in the throes of a fuel crisis due to a shortage of truck drivers, the man tipped to become chancellor was asked if Germany could help the country out.

The question was asked by a British reporter at a news conference with Olaf Scholz, who last night won the election by the slimmest of margins. It was met with laughter and the Social Democrat took it in his stride and in fluent English reminded the Brits that their troubles are also a consequence of Brexit.

“The free movement of labor is part of the European Union,” he answered. “We worked very hard to convince the British not to leave the union. Now they decided different and I hope they will manage the problems coming from that.”

Meanwhile, back in London, Boris Johnson is considering bringing in army drivers, with many gasoline stations running dry over the weekend as panic among motorists spread.