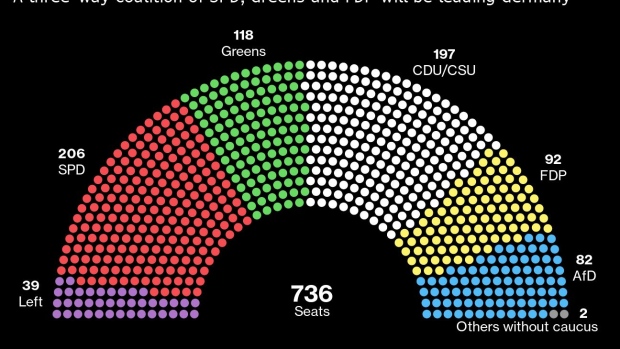 Olaf Scholz attends a signing ceremony of the coalition agreement to form a government, in Berlin, on Dec. 7. , Bloomberg

(Bloomberg) -- Olaf Scholz will be sworn in as Germany’s ninth chancellor since World War II on Wednesday, ending Angela Merkel’s 16-year tenure and inheriting a worsening pandemic crisis and a raft of geopolitical challenges including the standoff over Ukraine.

The 63-year-old Social Democrat, Merkel’s vice chancellor for the past four years, represents renewal at the top -- but not too much. Voters who awarded him a narrow victory in the Sept. 26 election saw much of what they liked in Merkel -- a steady hand and competent, if not charismatic, leadership.

He’ll take over after Germany under Merkel asserted itself as the paramount power broker in the European Union and a central player as the postwar global order begins to show cracks. Scholz will have to learn how to apply Germany’s leverage amid threats to Europe’s eastern frontier and the ascendancy of China as a superpower.

He’ll also have to deal with mounting pressure from the U.S. over the Nord Stream 2 gas pipeline connecting Russia with Germany’s north coast. The U.S. will push Germany to agree to stop the almost-completed project if Russian President Vladimir Putin invades Ukraine, according to documents seen by Bloomberg and people familiar with the plans.

“Clearly Russia has the ability to blackmail Germany and Europe,” Marcel Fratzscher, president of Germany’s DIW economic research institute, said Wednesday in an interview with Bloomberg Television. “My hunch at the moment is this pipeline will not take off, that it will be blocked permanently.”

Scholz has already demonstrated domestic political prowess, deftly assembling a government with two other parties with sharply diverging policies -- the Greens and the pro-business Free Democrats. The three-way coalition, which will hold 416 of the Bundestag’s 736 seats, was forged more quickly and seamlessly than most political observers in Berlin expected.

The 177-page coalition accord bears the finger prints of each party. The SPD secured a minimum-wage increase to 12 euros ($13.50) an hour and pension guarantees; the Greens brought the country’s coal-exit date forward to 2030; and the FDP won out on a promise not to raise taxes and to preserve constitutional debt limits.

But political fights are baked in. The Greens have vowed to push Germany to the forefront of the battle against climate change, with billions in investments to expand renewable resources on the path to carbon neutrality by 2045. The FDP has assured its base that it’ll keep government spending and debt in check.

Christian Lindner, the FDP chairman who will be Scholz’s finance minister, already sounded a warning on Tuesday, saying the government is observing inflation -- or “monetary devaluation” -- very closely and will factor it into fiscal decisions.

Robert Habeck, the incoming Green vice chancellor who oversee climate policy, said his party will stick to the ambitious pledges secured in the accord.

Foremost will be tackling the pandemic. There has been an unprecedented surge in infections in recent weeks in Germany, which has lagged western European peers in vaccination rates.

Scholz has called for a national effort to administer 30 million shots by year-end in a bid to prevent hospitals being overwhelmed by Covid patients. He has also backed a general vaccine mandate that is expected to go to a vote in the lower house of parliament before the end of the year.

A one-time SPD activist and lawyer who became a staunch defender of the labor-market overhaul under Gerhard Schroeder, Scholz brushed past setbacks to become labor minister in Merkel’s first “grand” coalition with the SPD. Returning to his hometown Hamburg, he won a state election and governed the city from 2011 to 2018.

He’s now based in Potsdam outside Berlin, where he won a direct seat for the Bundestag this year. His wife, Britta Ernst, is the education minister for the eastern state of Brandenburg.

Scholz, whom many in Germany had written off as recently as the summer, staged a surprise comeback victory in the September vote. His direct opponents, CDU Chairman Armin Laschet and Greens’ Co-leader Annalena Baerbock, stumbled in their bid to win over voters.

The new ruling coalition, a formation never tried at the federal level, will have Germany’s first cabinet staffed half by women (excluding the chancellor himself).

Baerbock will be the first female foreign minister, while the SPD’s Christine Lambrecht will be defense minister. Nancy Faeser, an SPD leader from the western state of Hesse, will take over the interior ministry -- another first.

European Central Bank President Christine Lagarde said she’s sure that Scholz and his government will “continue to work hard to advance European integration.”

“I have always admired how Angela Merkel steered Germany through many crises,” Lagarde was quoted as saying Wednesday by the Handelsblatt newspaper. “I am sure that Olaf Scholz will work just as calmly, thoroughly and in a focused way on the huge tasks that he and his government have before them.”