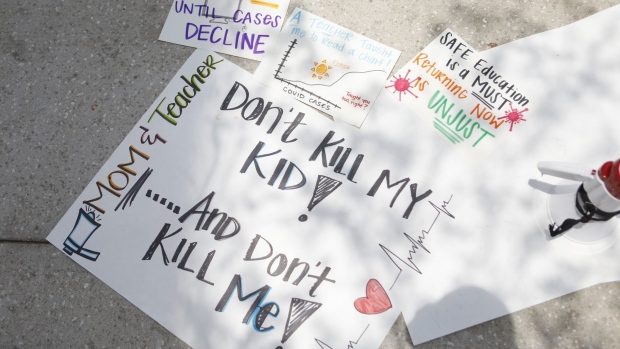 (Bloomberg Opinion) -- My first boss in journalism was Charlie Peters of the Washington Monthly, whose way of mentoring his young staff writers was to assign us articles that took us well out of our comfort zones. Given that my parents were both public school teachers, it was inevitable that when the teachers’ union in Washington, D.C., called for a strike in the fall of 1978, Peters told me to write about it.

Working on that article turned me into a critic of teachers’ unions, as Peters knew it would. Sadly, nothing that has happened in the ensuing 42 years — including, most recently, the unions’ insistence that schools be shut down during the pandemic — has caused me to change my mind.

In the 1970s, when I first started writing about teachers’ unions, the main issues they fought with school districts about were work rules. After a series of strikes in the early 1960s, teachers won the right to collective bargaining, which allowed them to negotiate for higher pay; for limits on the number of hours they worked; for due process rights for teachers; and more. They also gained a great deal of political power by aligning themselves with the Democratic Party.

Without question, teachers deserved to make more money — they still do — but the work rules turned out to be terribly damaging to public education. Those “due process rights” made it impossible to fire bad teachers. Seniority rules put length of service over merit and talent — and often drove good young teachers out of the profession. Limiting the number of hours a teacher had to be in the building meant that students who needed extra help never got it.

The most glaring example of the perversity of the work rules was the infamous rubber room in New York City. That’s where teachers whom the school department wanted to fire gathered every day and did nothing while awaiting a hearing to adjudicate their competence. It often took three years for the hearing to take place, during which time the sidelined teachers were paid their full salaries. When Steven Brill exposed the existence of the rubber room in the New Yorker in 2009, there was an uproar. Guess what? The physical rubber rooms may have gone away, but the practice of paying incompetent teachers to do nothing is still very much alive.

Almost every reform effort over the last 40 years has been an attempt to either sidestep teachers’ unions or force them to accept different work rules that would result in better performance. Teachers hate being evaluated on the basis of test scores — admittedly a crude tool — but until the testing of students became mandatory in the early 2000s, teachers weren’t evaluated at all.

The rise of charter schools was an explicit attempt to bring in young idealistic teachers who were not part of teachers’ unions — and were willing to go the extra mile that too many unionized teachers weren’t. That so many parents of underprivileged children tried desperately to get into charter schools spoke volumes about what they thought of their local public schools.

Bill Gates spent hundreds of millions of dollars on school reform efforts — some of which avoided the public-school unions, while others tried to embrace the unions. None succeeded. Meanwhile, students continued to pay the price.

Across the country, annual test scores have been flat or down for most of the 2000s (though to be fair, high school graduation rates have increased in many districts). And even though the test scores are supposed to give school administrators insight into teachers’ competence, it is almost as impossible to fire a bad teacher today as it was 40 years ago. To put it bluntly, thanks to the power of the unions, schools are being run for the benefit of the teachers, not the students.

And now there’s the pandemic. In March, moving to remote learning was a reasonable decision. Nobody knew how the virus would affect children, how deadly it would be or even how it was spread. Teachers were scared, and so were parents. We also didn’t know how deficient remote learning would turn out to be, especially for poor kids who lacked computers and broadband access or whose parents were unable to help them with their schoolwork.

We know a lot more now: in particular, we know that keeping schools open is one of the least dangerous — and most important — things a society can do. As my Bloomberg Opinion colleague Andreas Kluth predicted at the beginning of the pandemic, closing down schools was likely to widen the inequality gap. “Everything tells me that the virus-induced school closures of 2020 (and going into 2021?) will bifurcate today’s population of school children into winners and losers with lasting effects,” he wrote. That is exactly what’s happened.

Yet notwithstanding the scientific consensus — namely, that closing schools does far more harm than good — teachers’ unions in many big cities have simply refused to go back into the classroom, claiming it’s too dangerous. Public schools didn’t reopen in the fall in Chicago, Los Angeles, Philadelphia and most other large cities. Several teachers’ unions have said flatly that they won’t come back until a vaccine is available.

And then there’s New York City, which tragically shut down its school system on Thursday after having opened schools to hybrid learning in late September. Did Mayor Bill de Blasio make the decision to close them because they were suddenly Covid-19 hotspots? No. Although the citywide positivity rate has risen above 3%, the rate of infection in the schools was astonishingly low: 0.15%. Kids were not infecting teachers, and teachers weren’t infecting students — just as study after study had suggested would be the case.

Rather, it was because to get the United Federation of Teachers to agree to come back to the classroom, de Blasio had to agree that if the city reached a 3% positivity rate threshold, the school system would return to remote learning.

Was there any science behind the 3% threshold? No again. It was an arbitrary number designed to satisfy the union. Given how safe the schools have proved to be, it is clear that de Blasio should never have agreed to those terms. But it is equally true that the union could have looked at the evidence and decided to waive the 3% benchmark in the interest of their students. They could have followed the science. Instead, the teachers chose a path that may be better — or at least easier — for them, but which will inflict further harm on a generation of students who may never recover.

I’ve read that President-elect Joe Biden is considering Randi Weingarten, the head of the American Federation of Teachers, to be his education secretary. Weingarten is a devoted Democrat and a staunch liberal — even as she fiercely defends the prerogatives of her union members. As the school shutdowns have shown, those prerogatives have once again put the desires of teachers over the needs of students.

Schoolchildren, especially the most disadvantaged ones, need someone who will look out for their interests first and reform public schools, not consolidate power for the teachers’ unions.