Senate Majority Leader Chuck Schumer said he aims to secure passage of the next round of COVID-19 relief by mid-March, just when jobless benefits from the last package will be running out.

“We’ll try to get that passed in the next month, month and a half,” Schumer said with regard to pandemic aid on Monday, speaking on a call with New York City mass-transit advocates.

A bipartisan group of senators, along with the Republican and Democratic leaders of a moderate group of House representatives, on Sunday questioned the White House on President Joe Biden’s US$1.9 trillion stimulus proposal.

Brian Deese, head of Biden’s National Economic Council, was pressed on the justification for the price tag of the plan, which would be the second-largest emergency spending package on record. GOP Senator Susan Collins of Maine said she’d suggest to the bipartisan group that it look at pulling together its own, more targeted, proposal.

Stocks retreated following news of Schumer’s timeline, after Biden last week underscored the need to move quickly given the continuing onslaught of the pandemic. The S&P 500 dropped as much as 1.2 per cent before recovering some losses. It was down 0.5 per cent at 12:20 p.m. in New York, after hitting a record high on Thursday. 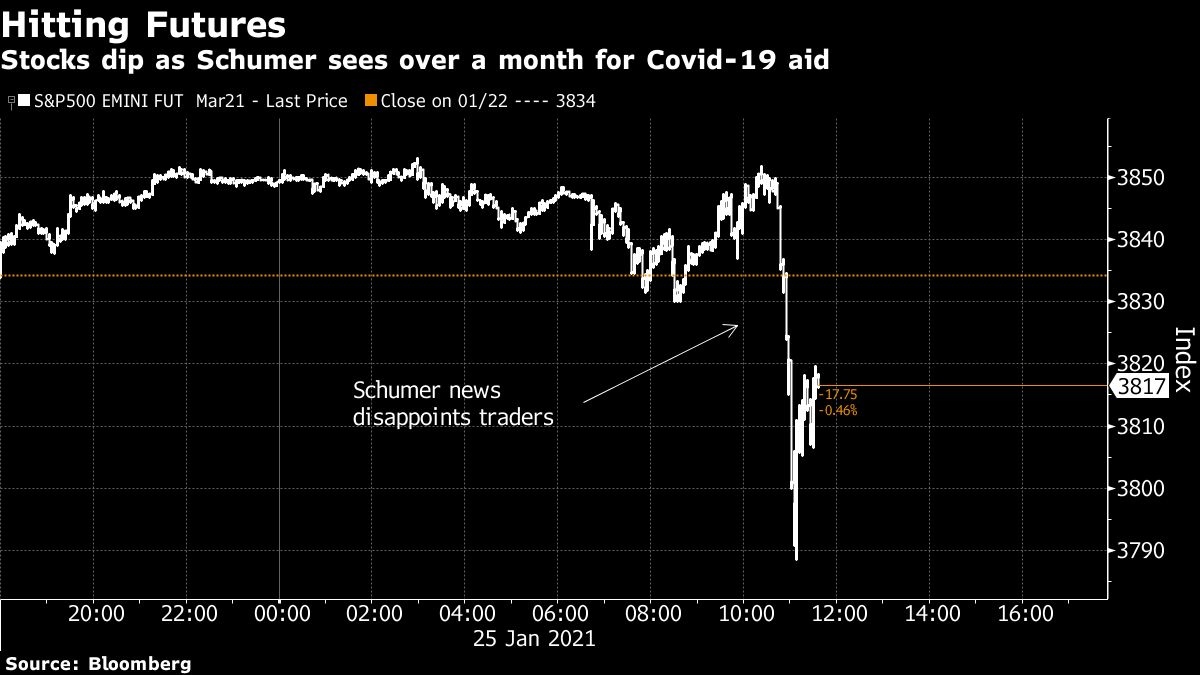 House Speaker Nancy Pelosi last week told donors on a call that she had originally wanted to pass the Biden stimulus using fast-track budget procedures in the first two weeks of the administration, but that those plans were up in the air.

The Schumer timeline reflects the length it could take to craft a bill using the expedited budget “reconciliation” process needed to bypass a filibuster by minority Republicans. The House and Senate would need to first draft a budget resolution for fiscal 2021. That process in the Senate involves a floor “vote-a-rama” where hundreds of amendments can be offered to the budget for simple majority votes. Those can take days to resolve.

Using the budget-reconciliation process has its limits. Under the rules, discretionary spending such as on health and education would be difficult or impossible to qualify, along with the US$15 minimum wage increase Biden wants. The US$1,400 stimulus checks would likely be possible, however.

Even under that process, all 48 Democrats and the two independents who caucus with them in the Senate would need to agree assuming no Republicans join in.

Another complication: the Senate has now agreed to begin holding former President Donald Trump’s impeachment trial on Feb. 9. It is unclear how long that process could take.

On Sunday’s call between the White House and bipartisan lawmakers, there was discussion of trying to quickly pass a funding bill for the coronavirus vaccine -- though splitting that from Biden’s other priorities could see the administration lose leverage on items such as expanding family and medical leave and boosting the minimum wage.

Adding to the delays, Schumer and Senate Minority Leader Mitch McConnell have yet to agree on how to organize the 50-50 Senate and that’s holding up the ability of committees to do their work on legislation. McConnell has demanded Democrats promise not to eliminate the 60-vote filibuster-ending requirement for most legislation as part of the deal, something Schumer has called unacceptable.