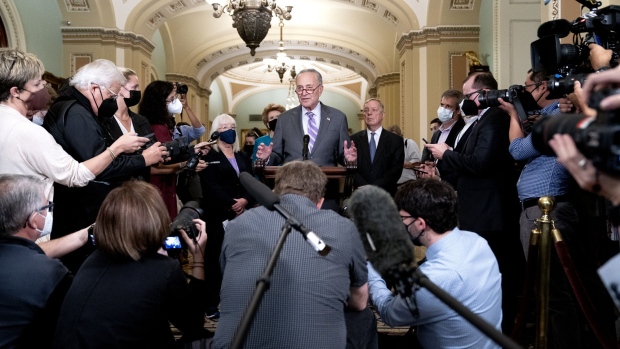 Schumer has set an end of the month deadline to break a deadlock among Democrats over Biden’s multi-trillion-dollar economic plan. That would pave the way for the House to clear a separate bipartisan infrastructure bill. Backed up after that is a Dec. 3 deadline to fund the government and once again raise the government’s debt ceiling.

While House Speaker Nancy Pelosi also has to manage party divisions on Biden’s plan, Schumer must deal with McConnell and a Republican minority that can throw roadblocks in front of the rest of the Democratic agenda, including voting rights, immigration and a host of other 2020 campaign promises Schumer may never be able to deliver.

“From here on, it’s only going to get more difficult,” said Democratic strategist Jim Manley, who was a top aide to former Senate Majority Leader Harry Reid. “There’s no more kick the can down the road. Schumer has to make some decisions not everyone will be happy with.”

The outcome could determine how Democrats fare in next year’s midterm elections. The party will struggle to keep its Senate majority, and Republicans are favored to seize control of the House where Democrats now hold a 220-212 majority. Historical patterns and Biden’s falling approval ratings add to the potential of a Democratic rout and a dead halt to the party’s agenda.

During Schumer’s first months in power, the Senate has made some other headway, approving Biden’s cabinet and pushing through a budget resolution with only Democratic votes that sets the stage for the economic plan. A number of bipartisan bills also have moved through the chamber, including the infrastructure measure, legislation to boost U.S. semiconductor chip production and competitiveness against China, and hate crimes legislation.

But negotiations over the economic package of tax increases paired with expanded health, child care and climate change programs have dragged on for weeks. Schumer’s biggest challenge is addressing the competing demands of centrists like West Virginia Senator Joe Manchin and progressives like Senator Bernie Sanders of Vermont, typically with Republicans aligned against him.

Sanders regards the $3.5 trillion framework Democrats drafted as a compromise from the $6 billion he sought. Manchin and Arizona Senator Kyrsten Sinema want it to be substantially less -- Manchin has set the bar at $1.5 trillion. Biden has said he thinks a compromise might be found around $2 trillion.

If Schumer can get the economic package through, and if both that and the infrastructure package reach Biden’s desk, he will have carried off “a stroke of genius,” said Republican strategist Michael Steel. But if he doesn’t, it will be regarded as a turning point that pulled down Biden’s presidency, said Steel, once a top aide to former Republican House Speaker John Boehner.

Meanwhile, a potential fiscal cliff looms around Dec. 3, when both a stopgap measure funding government agencies expires and a short-term debt-ceiling increase are projected to run out. With Democrats controlling Congress and the White House, they could bear the brunt of blame if the government shuts down. But there’s no deal yet on the 12 annual spending bills that fund agencies and no formal bipartisan agreement on top-line spending levels for defense and non-defense programs.

The debt limit could be even trickier. McConnell has turned it into a political cudgel by attempting to link it to the “liberal wish list” in the Biden agenda and insisting Democrats use the cumbersome reconciliation process to raise the government’s borrowing authority on their own.

With the government approaching the debt limit earlier this month, McConnell cleared the way for a $480 billion short-term extension. But he vowed that won’t happen again.

“I will not provide such assistance again if your all-Democrat government drifts into another avoidable crisis,” McConnell wrote in a letter to Biden.

So far, Schumer isn’t budging either, insisting along with Pelosi that the next boost in the debt limit be bipartisan, as has largely been the custom. That could point the way to an attempt by Democrats to include it in the year-end spending bill, adding another politically fraught element to that debate.

In the next few weeks, two other issues high on Democrats’ agenda are coming to a head -- voting rights and immigration. Each is at risk of adding to the list of items falling away due to unified GOP opposition that already included gun control and an overhaul of policing practices.

Schumer plans to tee up a Wednesday vote to advance a Democrat-drafted overhaul of U.S. election laws, which Republicans are expected to block. That will set up another debate among Democrats over doing away with the filibuster rule, which allows just 41 senators to thwart most legislation. But Manchin and Sinema oppose modifying the rule, again putting them at odds with progressives and leaving Schumer short of enough support to prevail.

On immigration, Senate Democrats are trying -- so far unsuccessfully -- to aid millions of undocumented immigrants in the Democrat-only economic package and time is running short.

The Senate parliamentarian has twice rejected language that would provide a pathway to citizenship for millions of these immigrants in the economic plan. Senate Democrats are crafting a new proposal that would protect a large group of undocumented immigrants from being ejected from the U.S. and let them work while they’re here, but it’s not clear it can pass muster under Senate rules.

Schumer and his leadership team are under growing pressure from outside groups angry over what they see as a lack of progress on key goals. Immigration groups, who are key to turning out the Latino vote in next year’s midterms, insist they aren’t taking “no” for an answer.

“Democrats will meet accountability at the ballot box if they fail to deliver legalization for our communities, and for the country, in this reconciliation package,” said Lorella Praellis, co-president of Community Change Action.