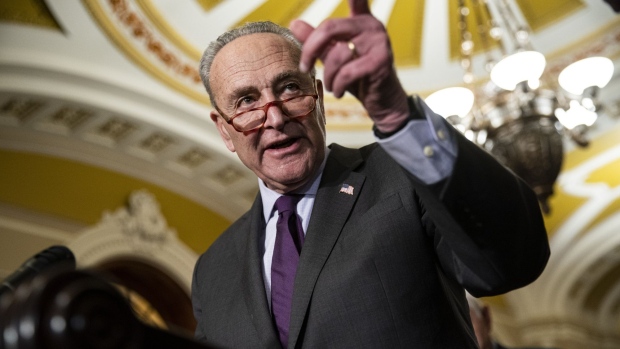 Senate Majority Leader Chuck Schumer, a Democrat from New York, speaks during a news conference following the weekly Democratic caucus luncheon at the US Capitol in Washington, DC, US, on Tuesday, Nov. 29, 2022. A short-term stopgap funding bill to delay a December 16 shutdown deadline appears increasingly likely as negotiators have made little concrete progress toward a full government funding package. , Bloomberg

(Bloomberg) -- Senate Majority Leader Chuck Schumer served notice Wednesday that Democrats will use their expanded majority in the chamber next year to subpoena corporations and executives to strengthen oversight investigations.

“Subpoena power can deal with corporate corruption and inequities and other problems throughout the country,” the New York Democrat said at a news conference. He declined to say what companies or industries he thinks would be subject to scrutiny.

Democratic Senator Raphael Warnock’s victory Tuesday in Georgia’s runoff election over Republican Herschel Walker gives Democrats a 51-49 majority for the remainder of President Joe Biden’s current term.  That means Democrats would have a majority on committees, most of which require only a majority vote to issue subpoenas. In the current 50-50 Senate, committees are split evenly between Republicans and Democrats.

“That’s all going to change because we’ll have the advantage on every committee,” Schumer said.

“Oh yes,” Massachusetts Democratic Senator Elizabeth Warren said when asked if she was looking forward to using the authority next year. Warren, a member of the Finance, Banking and Armed Services committees, said she’s “not naming names yet.”

Senate Budget Chairman Bernie Sanders, a Vermont independent, also said he’s thinking about the potential to demand appearances by company representatives, but he didn’t name names either. “It’s a little bit early, but the answer is yes.”

Democrats have in the past targeted financial firms for investigations, and both parties have been focused on the crypto industry particularly after the implosion of Sam Bankman-Fried’s FTX exchange. Some Senate Democrats have also talked about the possibility of calling in Elon Musk for testimony about his purchase of Twitter.

Both parties are gearing up for investigations in the next Congress. Republicans, who will control the House in January, have vowed to conduct investigations into the Biden administration’s handling of the southwest border, the chaotic withdrawal from Afghanistan, the origins of Covid-19 and the business dealings of the President Joe Biden’s son Hunter Biden.

(Updates with remarks from Warren, Sanders in sixth, seventh paragraphs)