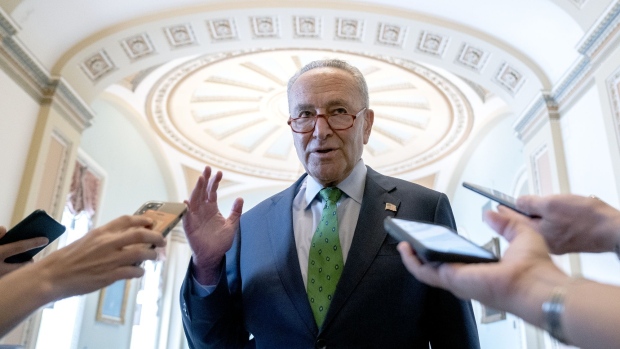 (Bloomberg) -- Senate Majority Leader Chuck Schumer said he will tee up a floor vote for Wednesday on advancing a Democrat-drafted overhaul of U.S. election laws, a move that is likely to be blocked by Republicans and set up another confrontation over whether to alter or end the filibuster.

In a letter to all Senate Democrats, Schumer said he will take steps Monday to set up the vote for later in the week on “consequential voting rights legislation that has the support of our entire caucus.”

“We cannot allow conservative-controlled states to double down on their regressive and subversive voting bills,” Schumer wrote. “The Freedom to Vote Act is the legislation that will right the ship of our democracy and establish common sense national standards to give fair access to our democracy to all Americans.”

The legislation is designed to counter a record number of new voting restrictions emerging from Republican-led state legislatures. Democrats say the GOP proposals aim to curtail participation by minorities and poorer Americans. The bill, dubbed the Freedom to Vote Act, reflects a compromise reached last month by Democrats, after Republicans blocked a much broader voter access bill in June and again in August.

The new bill’s drafters include moderate Democrat Joe Manchin of West Virginia, who said the earlier version lacked bipartisan support and was too expansive. The agreement united all Senate Democrats behind the same proposal for the first time.

The measure would create an automatic voter registration system through each state’s motor vehicle agency, make Election Day a public holiday and provide voters with at least 15 days of early voting for federal elections. It also is designed to curtail partisan “gerrymandering” of congressional districts and would put in place new campaign finance disclosure requirements that include mandating Super-PACs and other outside groups report their donors.

Among other changes from the earlier version, it includes a voter ID provision Manchin wanted. It lets voters use a number of types of identification cards and documents, which can be either hard copies or in digital form.