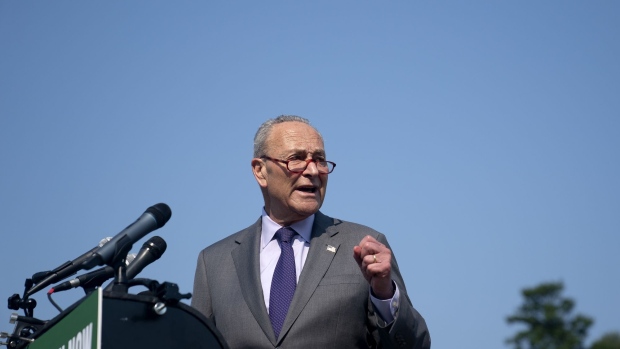 Senate Majority Leader Chuck Schumer, a Democrat from New York, speaks during a "Climate Action Now" news conference outside the U.S. Capitol in Washington, D.C., U.S., on Wednesday, July 28, 2021. Senators negotiating the terms of a $579 billion infrastructure plan chipped away at some of the issues that had been holding up an agreement but have yet to find a breakthrough on other differences that would seal an agreement and lead to a vote on legislation. , Bloomberg

(Bloomberg) -- Senate Majority Leader Chuck Schumer doubled down on his vow to enact sweeping climate provisions through infrastructure and spending legislation, as he seeks to reassure progressive Democrats.

“We know that we can’t let this moment pass us by. It’s our time to act,” Schumer, a New York Democrat, said in a news conference outside the U.S. Capitol building Wednesday. “And as majority leader I have made it clear I will not pass an infrastructure package that does not reduce carbon pollution at a scale commensurate with the urgency of the climate crisis we face, plain and simple.”

Although a $579 billion, bipartisan infrastructure plan now being negotiated includes some climate provisions, including investments in electric vehicle chargers, Senate Democrats and the Biden administration are counting on a separate tax-and-spending bill to enact far broader measures, such as a clean electricity mandate.

Without hope of Republican support for that second package, congressional leaders aim to advance the measure through a budget reconciliation process that allows some spending measures to advance on a simple majority vote. That would keep it from being thwarted by a Republican filibuster.

“Through the bipartisan infrastructure bill and the budget reconciliation, the Senate will make our largest investments to tackle the climate crisis and environmental justice, ever -- ever -- in our nation’s history,” Schumer said.

Senators negotiating the infrastructure plan have chipped away at some issues that were holding up an agreement but have yet to find a breakthrough on other differences that would seal a deal and lead to a vote on legislation. The negotiations have blown past several deadlines despite persistent expressions of optimism from lawmakers in both parties that they were close to an agreement. Schumer has warned that he’ll keep the Senate in session through the weekend if necessary.

House Speaker Nancy Pelosi, a Democrat from California, stressed that the climate measures have the support of President Joe Biden, who has laid out goals of decarbonizing the power sector by 2035 and halving U.S. greenhouse gas emissions by the end of the decade.

“We’re in a good place to reach the goals that are set out, hopefully in the reconciliation very soon,” Pelosi said at the same news conference. “Everybody knows that when they make that vote, it will be signed by Joe Biden, a pro-climate champion in the White House.”