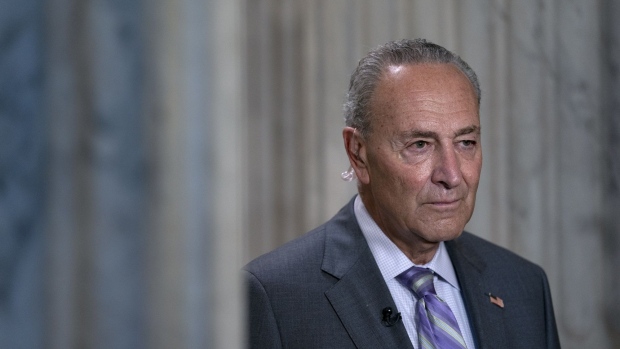 Senate Minority Leader Chuck Schumer said on Wednesday that public pressure on the White House may cause President Donald Trump to make the concessions needed to get a stimulus deal in coming weeks.

He made the comments as Senate Democrats prepared to block a slimmed-down coronavirus relief bill favored by Republicans that’s set for a vote on Thursday. Schumer and House Speaker Nancy Pelosi have opposed that effort as insufficient to prop up an economic recovery slowed by the end of earlier fiscal stimulus.

“Donald Trump is learning that he will not be able to get attention away from COVID with his appeals to violence, his appeals to disunity, his appeals to nastiness,” Schumer told reporters. “They may be forced to come back to the table because COVID is the major issue facing the American people.”

Senate Majority Leader Mitch McConnell had a starker outlook Wednesday afternoon, accusing Democrats of playing politics in their refusal to make deeper concessions. Talks on a compromise COVID-19 relief package between the White House and congressional Democrats broke down more than a month ago.

“They don’t want to do a deal before the election, because they think that hurts their prospects in the election,” McConnell said.

At issue is how the public perceives the two sides’ conduct in the run-up to the presidential election less than two months away. Trump remains behind Joe Biden, the Democratic nominee, in polls, and on Wednesday faced renewed focus on his conduct during the coronavirus crisis, thanks to revelations in a forthcoming book by Bob Woodward that Trump intentionally played down the severity of the virus to the public.

The last proposal from Democrats on the stimulus was US$2.2 trillion, down from an earlier US$3.4 trillion. Schumer saw some potential signs of openness in the Trump administration to a bigger package than the US$1 trillion it previously endorsed, in remarks last week by Treasury Secretary Steven Mnuchin at a House hearing.

Mnuchin said on Sept. 1 that “whether it’s US$1 trillion or US$1.5 trillion -- again, let’s not get caught on a number. Let’s agree on things. We can move forward on a bipartisan basis now.”

“If they come back and meet us in the middle, we’ll be eager to talk to them,” Schumer said Wednesday.

Even so, Mnuchin and Pelosi were unable to bridge their gap in a telephone call after that hearing last week. In a statement last Tuesday night, Pelosi said she told Mnuchin that Democrats had “serious questions” remaining in any negotiations. That included the administration’s view that a smaller package could be pursued now and a larger one later.

The so-called skinny bill that the Senate is to vote on Thursday would provide between US$500 billion and US$700 billion in relief.