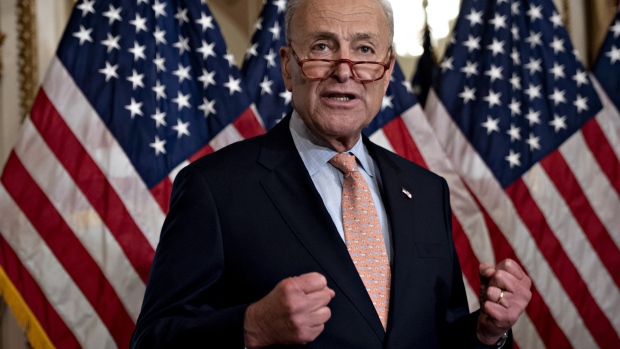 Senate Minority Leader Chuck Schumer, a Democrat from New York, speaks before H.R. 3877, the Bipartisan Budget Act of 2019, is signed at the U.S. Capitol in Washington, D.C., U.S., on Thursday, Aug. 1, 2019. The Senate sent President Donald Trump legislation to extend the debt limit and allow more government spending until after next year's election, a bipartisan deal that drew opposition from some who expressed concern about the deficit. Photographer: Andrew Harrer/Bloomberg , Bloomberg

Senate Minority Leader Chuck Schumer said he’ll appoint Bharat Ramamurti, a former aide to Senator Elizabeth Warren, to be one of five people on a congressional oversight commission for part of the US$2.2 trillion coronavirus stimulus law.

Ramamurti, who was one of Warren’s senior advisers in the Senate and in her presidential campaign, has experience in finance and “a great nose for figuring out wrongdoing,” Schumer said in a call with reporters Monday.

Four members of the panel, including Ramamurti, will be named by each of the top Republican and Democratic leaders in the House and Senate. The fifth person will be a bipartisan consensus choice.

Democratic leaders pushed for layers of oversight to monitor the distribution of federal aid intended to help companies and individuals weather the economic impact of the global health crisis. The congressional panel will operate along with an accountability committee from relevant government departments and a special inspector general.

President Donald Trump‘s pick for this stimulus inspector general, White House lawyer Brian Miller, will have to be confirmed by the Senate.

Democrats have broadly criticized the Trump administration’s handing of the government response, especially as the lack of medical supplies in some hospitals hamper care for patients and protection for health care workers.

Schumer, a New York Democrat, told reporters that governors and health-care officials need a national system to distribute supplies for responding to the coronavirus pandemic.

“It can’t be helter-skelter. It can’t be catch-as-catch-can,” Schumer said.

Schumer called on President Donald Trump to “fully” use the Defense Production Act, which provides wartime-like powers to speed production of needed resources. Trump last week invoked it to force more production of ventilators and face masks to fight the pandemic, but Schumer said it should be more broadly utilized.

Further, the Democratic leader said, “The country needs one person” in charge.

The recommendation to put a senior military officer in charge was the subject of an exchange of critical letters between Trump and Schumer last week. In a letter dated April 2, Schumer said there currently is a “federal leadership void” that has left states and cities “fending for themselves.” He also said that Trump’s current choice to lead the Defense Production Act, White House trade adviser Peter Navarro, isn’t qualified to do it.

“It’s like a scavenger hunt for their lives and it’s really infuriating,” he said, blaming the lack of federal coordination.

Schumer’s home state has had the highest number of confirmed coronavirus cases and pandemic-related deaths.