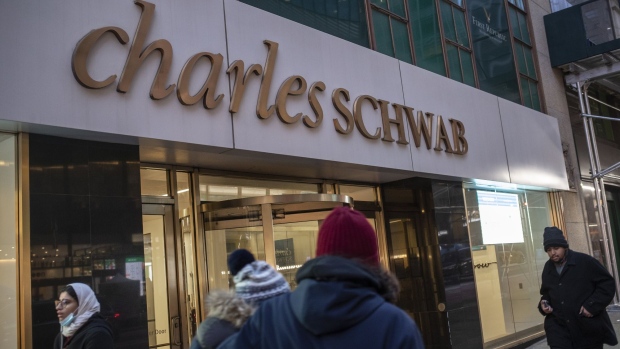 (Bloomberg) -- Charles Schwab Corp. fell the most in more than two years after first-quarter profit and revenue missed analysts’ estimates.

For the three months ended in March, adjusted earnings per share came in at 77 cents, the Westlake, Texas-based company said in a statement Monday. That fell short of the 84-cent estimate of analysts surveyed by Bloomberg.

Customers placed 6.58 million daily average trades in the first quarter, a decline of 22% from the year-ago period, which included a surge in trading activity across the industry, amid the investor rush into meme stocks. Net revenue of $4.7 billion also came in slightly below consensus estimates of $4.8 billion.

Retail trading has surged in recent years after brokers including Schwab cut commissions to zero and market swings during the pandemic created hordes of new at-home investors. But the most frenzied activity has abated: about 17% of U.S. equity trading volume came from retail investors by early March, down from a peak of 24% in the first quarter of 2021, according to estimates from Bloomberg Intelligence analysts Jackson Gutenplan and Larry Tabb.