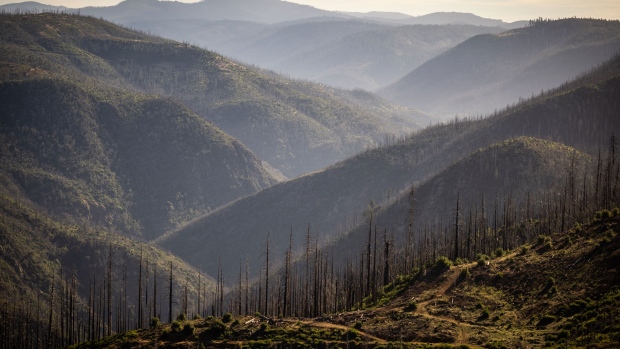 (Bloomberg) -- To the untrained eye, the scrubby slope off Wentworth Springs Road in the Eldorado National Forest looks like any other patch of Sierra Nevada ridgetop. Tufted in native shrubs and flecked by darkened pine stumps, it’s part of a 30,000-acre swath of land that was deforested in 2014, when the King Fire tore through 17 miles of canyon in less than six hours.

But Dana Walsh can see what’s unique. On a recent Sunday morning, the USDA Forest Service forester bent over a white flag pinned into the ground to mark a barely-visible seedling. As she points to other seemingly camouflaged baby conifers nearby, what starts to emerge is a subtle pattern she calls cluster planting.

These little trees were placed here under Walsh’s supervision earlier this year, as part of an ongoing replanting of about 8,000 acres of the massive King Fire scar. She designed this area to mimic the gaps of cleared-out vegetation that decades of frequent, low-severity fire—a natural feature of the Sierra Nevada ecosystem—would create in a more mature forest. Emerging science suggests that creating more of that spotty, clustered mosaic in California forests could make them more wildfire-resilient.

“We know one of the problems behind California’s incinerating forests is the increased fuels from years of fire suppression,” said Malcolm North, a research ecologist at the Forest Service’s Pacific Southwest Research Station and professor of forest ecology at the University of California, Davis, referring to the dense overgrowth that results from swiftly stamping out wildfire. “But we’ve also learned that the spatial pattern of trees turns out to make a big difference as well.”

Yet replicating that organic pattern is a relatively new approach to tending these woodlands, and it clashes with a longstanding norm of planting trees individually, at even intervals, in order to maximize growth. That model—sometimes referred to as plantation forestry—is still used by many practitioners in the Forest Service and on private lands. And while planting trees in groups is not a totally foreign concept, some see clustering as counterproductive.

“It does cut against some basic physiology and dynamics where trees compete against each other,” said Ramiro Rojas, assistant regional silviculturist for the Forest Service in California. “That likely is not to the benefit of growing trees quickly and fast.”

This is more than a philosophical debate: By June 6, wildfires in California had already burned nearly twice as much acreage since January as they had over the same period in 2020. With the state bracing for another brutal season on par with the record 4.2 million acres burned in 2020, Governor Gavin Newsom has proposed an unprecedented $2 billion wildfire mitigation budget. Much of that is slated for thinning forests and cutting gaps in vegetation where flames can be controlled, as well as boosting resources for firefighting crews.

There’s also at least $100 million for forest health projects, including reforestation. Over the next year, a committee under the statewide Forest Management Task Force will formulate a plan that targets burned areas and outlines best practices to restore forests to a healthier state. As climate change turns up the dial on intense wildfires, Craig Thomas, a longtime environmental activist who leads the Fire Restoration Group, a nonprofit that advocates for the use of prescribed fire, worries state leaders won’t heed the latest science and instead favor older, faster methods.

“Are we going to allocate this funding to practices that basically repeat the failures of the past, or are we going to bring in the best available science and scientists and do what they’re recommending?” he said. “When it comes to fire, we are on the wrong side of nature.”

For millennia, frequent, low-severity fires burned throughout the Sierras, clearing out low-lying shrubs and creating a patchwork of mostly older trees in clumps and clusters.

That seems to have produced a virtuous cycle, where forests shaped by fire could stand up to fire. In a 2020 paper in Ecology Letters, research scientists (including North of the Pacific Southwest Research Station)  studied satellite data from more than 1,000 wildfires that burned in California forests between 1984 and 2018, and found that spottier, more varied vegetation patterns were linked to greater survival. A 2019 literature review in Forest Ecology and Management by North, Walsh and more than 20 other scientists and practitioners delved into why this pattern works: It breaks up the tree canopy, as well as shrubs, grasses and other potential wildfire fuel on the ground, so that when a blaze rolls through, patches of the forest burn up, but other parts are left intact.

“It changes the way fire behaves in the landscape, so that pattern of variability becomes self-reinforcing,” North said.

Clusters can also help trees take advantage of underground water resources so they better stand up to drought, he said.

But the old, grid-like model—imported to the U.S. via age-old German methods of planting crops on clear-cut forest land—has predominated in the Sierras since the 1940s. A century of suppressing forest fires, despite their ecological benefits, has led to forests overgrowing and densifying, leading to a vicious cycle recently accelerated by climate change.

“Where we once used to have frequent low severity fires, now we have more fires with a propensity for more severity,” said Ryan Tompkins, a forest and natural resources advisor for the University of California’s cooperative extension program and a former longtime Forest Service forester who has also practiced the cluster planting method.

Contrasting satellite images of Eldorado National Forest, which once produced 195 million board-feet of timber a year, and Yosemite National Park, which is managed as wilderness and has been treated with controlled burns since the 1970s, shows the difference: The former is much denser, with many trees following symmetrical lines, in some areas reminiscent of cornrows on a midwestern farm. The latter is more of a patchwork, interspersed with meadows and large bare areas.

Managing California’s precious natural resources has sparked intense debate in the past. In the 1990s, environmentalists, logging companies, and the forest service waged protracted legal battles and even some physical confrontations over protected species like the spotted owl. Now, North’s ecological research and Walsh’s work is being met with skepticism and resistance from some longtime foresters.

For one, it’s a big departure from the way they’ve done their work. Pages upon pages have been written and published in academic journals, technical reports, and timber industry guides about how trees should be planted: mostly, evenly and apart. While cluster planting may be appropriate in some settings, decades of practice have affirmed a basic rule of thumb, said Rojas, the Forest Service silviculturist.

“Evidence is our experience: If you plant trees close together, they don’t grow as well,” he said. “You only get one shot at getting it right when you’re out there, and to risk your one shot on something you haven’t seen done before is disconcerting.”

Others say that the gappy pattern reduces the potential for carbon sequestration. Bill Stewart, a forestry specialist at University of California, Berkeley’s cooperative extension program, thinks the state should aim to focus on maximizing the number of stands in the ground, allowing trees to grow and store more carbon, then thin them once they’re mature if other patterns are desired. He doesn’t see why clusters would be an advantage, calling it a less-than-critical matter of appearances.

“We need to move on from the right aesthetic,” he said. “Tackling climate change is the number one goal, so it’s important to plant forests that sequester carbon every year and allow us to replace more cement and steel.”

But the problem with the idea that more trees means more carbon sequestration, North said, is that climate change and wildfire might not make it possible for as many to grow up and survive in the future. With resources limited, clustering saplings in places where water is likely to be available long-term, with wide gaps between them, may be the more climate-smart idea to try.

“When I give talks on this, I try to ask, is there harm in trying this in a few places and seeing how it does?” he said. “And it blows me away that I can get very few people willing to try it. But then how do you ever learn?”

Jamahl Butler, the Forest Service’s acting deputy director for ecosystems management in California, said the agency uses many types of planting methods, and that disagreement is common. “It’s not a hard science where there's one way to do things,” he said. “We adapt as we find out new things.”

Patrick Wright, director of the governor’s Forest Management Task Force, said that the question of how to pattern reforested areas will be tackled in consultation with agency officials, foresters, and scientists. But the first step to building a forest resilience plan will be to determine which areas should be reforested at all, given the huge magnitude of acres burned in recent years.

Walsh, who recently started a new position at the Forest Service working with private landowners in California, says she hopes to take part in those state-level discussions. She sees her cluster planting work as one tool—she also uses the even-spaced approach—and one of many ways foresters should be testing out new ideas as a warming planet reshapes the forests.

“We have to keep experimenting,” she said. “I see it as part of our responsibility to making sure these forests survive.”