Don Butler was looking to quit his Ph.D in political science when a business contact introduced him to Peter Thomson, a member of the dynasty behind Thomson Reuters Corp. and one of the world’s biggest fortunes.

That connection led to the Canadian billionaire hiring the former banker to ramp up his Silicon Valley assets and diversify his fortune away from his family’s namesake media empire, with Thomson becoming a prolific backer of North American startups across finance, cybersecurity and marketing.

Now, rising rates, weakening economic growth and widespread inflation are doing nothing to slow down Butler, who joined Thomson’s venture arm in San Francisco at the turn of the century. After leading the firm through the dot-com bubble era and the 2008 financial crisis, the former Lehman Brothers investment-banking analyst is scouring the wreckage of a tech slump that has caused steep losses at hedge funds and investment firms worldwide.

“This will be what feels like our fourth turn of the cycle,” Butler, Thomvest Ventures’ managing director, said in a recent interview. “We’ve been kicking ourselves for not having taken more risk” when valuations were still surging, he added.

Butler, 54, manages about US$500 million of Thomson’s fortune, which is valued at US$8.8 billion, according to the Bloomberg Billionaires Index. 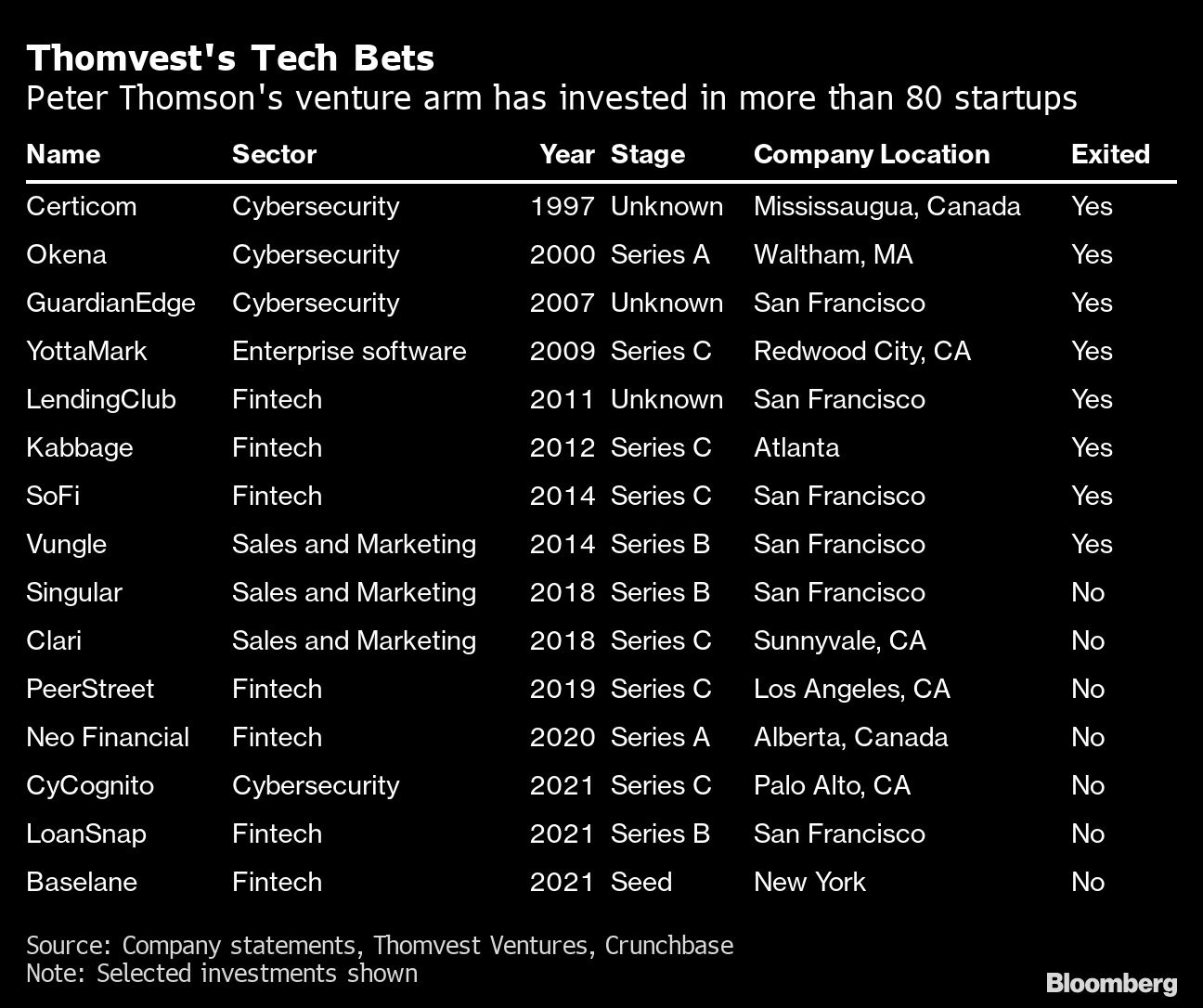 The San Francisco-based firm has made more than 80 investments since its creation in 1996, including peer-to-peer lenders SoFi Technologies Inc. and LendingClub Corp., one of Thomvest Ventures’ best bets with returns of more than 1,500 per cent within five years. Since January, Thomson’s venture arm has closed at least six deals and is looking into convertible debt, an increasingly popular way for startups to raise funds without having to lock in a valuation, while limiting potential losses for investors.

Butler declined to provide full details of Thomvest Ventures’ returns, though he said it has given back capital to Thomson over the years. Investing in ventures “that would forever change our world” is a “rewarding journey,” Thomson, 57, said in a statement for this article.

Thomson is the grandson of Roy Thomson, known as the first Baron Thomson of Fleet by the time he died in 1976 at 82. The family has a fortune valued at about US$63 billion, according to the Bloomberg index tracking the world’s 500 richest people.

The clan got its start in the media business when the patriarch opened a radio station in Canada in the 1930s. It expanded into television and more than 200 print titles, including the Times of London, before selling most of them. The company became Thomson Reuters in 2008 after acquiring the London-based news agency for about £8.7 billion (US$10.5 billion).

Peter Thomson’s decades of venture investing show how he -- like many other global billionaires -- has parlayed the proceeds of his family fortune into scores of other businesses and sectors. Thomvest’s real estate arm in Dallas oversees a portfolio of homes in the US and Canada, while its asset-management division in Toronto has investments in private equity funds. Thomson also owns a motor rally team bearing his name and has competed in the sport himself.

Still, most of Thomson’s wealth comes from his share of the family’s controlling stake in the media business. He sits on the board of the company with his brother David, 65, the third Baron Thomson of Fleet and Thomson Reuters’s chairman. They also chair Woodbridge, the entity that controls their family’s stake in the media firm along with Canada’s Globe and Mail newspaper.

The Thomsons have returned to their business roots in recent years. They sold a majority stake in their financial-data business to a group led by Blackstone in 2018, breaking up the merger of Thomson Corp. and Reuters Group Plc that David had orchestrated only a decade earlier. The London Stock Exchange Group Plc then acquired that division in a US$27 billion deal that closed in early 2021.

Those sales are helping return cash to Canada’s richest clan. The family’s holding company has received more than US$6 billion in dividends over the past decade, according to data compiled by Bloomberg.

Thomson’s venture-capital arm is now looking to expand a team that currently has about eight employees in San Francisco. The firm typically allocates between US$5 million and US$25 million per transaction and aims for gains of at least 200 per cent -- a target it’s often met since it made its first investment of at least US$1 million a quarter-of-a-century ago. It has also partnered with larger players such as Sequoia Capital. 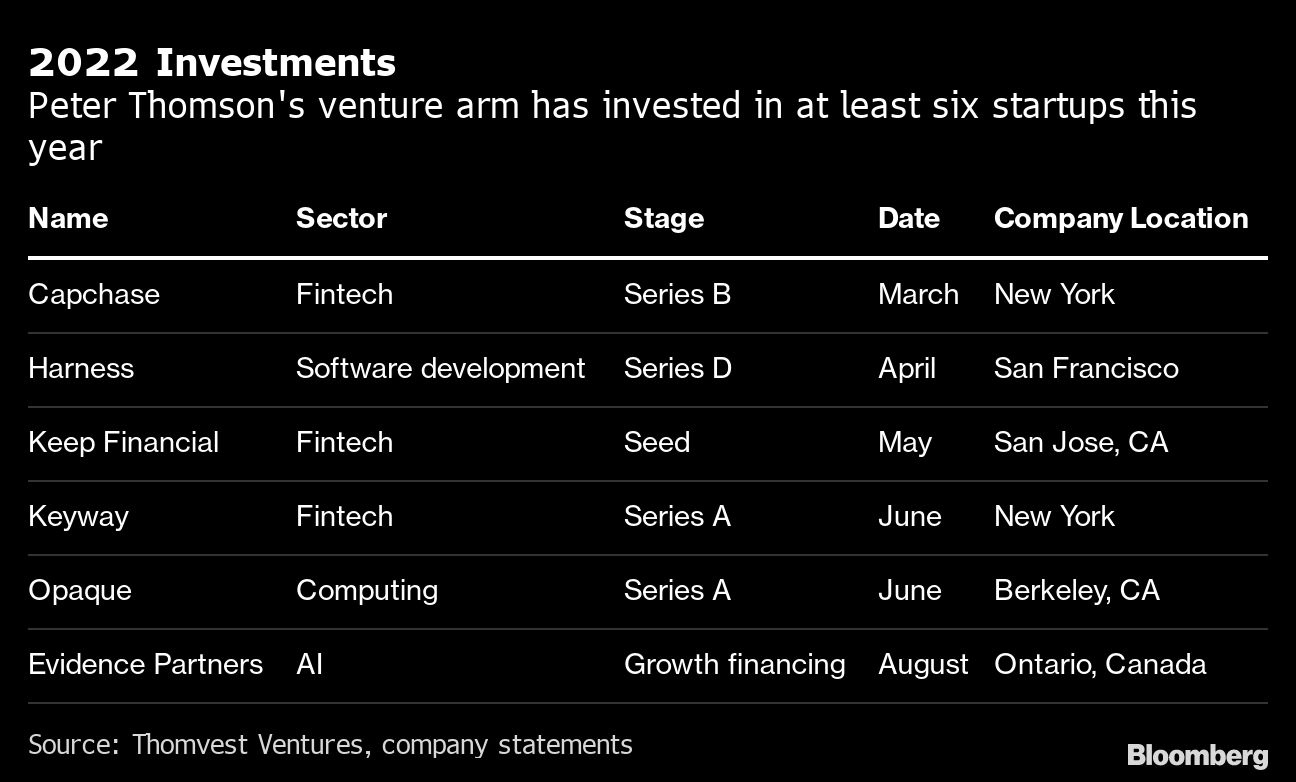 Like at other venture-capital firms, some of the bets haven’t panned out. Thomvest Ventures is underwater on two of its early-stage investments of at least US$1 million over the past couple of decades and has lost smaller sums on a few others, Butler said.

While the firm has avoided crypto, Butler said it’s interested in decentralized finance, the movement known as DeFi that aims to replace traditional banking with software using blockchains.

“Sometimes you’ll see people say, ‘This feels like the next big thing,’” Butler said. “That is very much how we’re sensing this right now.”